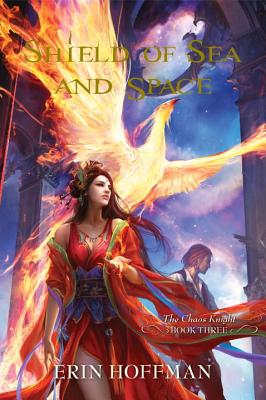 Shield of Sea and Space (The Chaos Knight #3)

Vidarian Rulorat, called the Tesseract, a powerful magic-user whose abilities spread across multiple elements, finds himself at war with the Alorean Import Company, a powerful cabal of merchants wealthy enough to buy nations. By opening the gate between worlds, Vidarian released the Starhunter, goddess of chaos. With her coming, wild magic returned to the world of Andovar, bringing with it shape-changers and strange awakened elemental technologies, including many-sailed ships powered by air magic, and mechanical automata lit from within by earth and fire. Now, Vidarian discovers that the Alorean Import Company is determined to eliminate two-thirds of this new life on Andovar in the hopes of hoarding more magic for themselves in a new, worldwide plutocracy. Along with his human, gryphon, and shape-changer allies, he must stop the Company if he is to safeguard any future for the diverse life of Andovar, including his and Ariadel's newborn daughter. With the existence of whole species hanging in the balance, Vidarian is locked in a race for the future of the world.

Praise For Shield of Sea and Space (The Chaos Knight #3)…

"Now unfettered by establishing her marvelous world and its magic and belief systems, this second volume is even better than the first, with author Erin Hoffman offering all out intrigue and action from cover to cover centering on troubled hero Vidarian…Hoffman's world just oozes careful world building, with clearly well thought out races and history that simply oozes from every page. Highly recommended." -SciFiPulse

"The second Chaos Knight fantasy is an engaging thriller…this fast-paced tale will remind readers of the Raymond E. Feist's Riftwar saga as Vidarian's struggles with the moral implications of what he wrought."
-Midwest Book Review

Erin Hoffman is the author of The Chaos Knight books Sword of Fire and Sea and Lance of Earth and Sky. Born in San Diego, California, she now lives with her husband, two parrots, and a dog in the San Francisco Bay Area. Her eclectic college degree landed her in the strange waters of video-game design, where she tells stories using a diabolical combination of character, controller, and math. A graduate of the Odyssey Fantasy Writers Workshop, her games have been played by over four million kids and adults worldwide. Visit her online at www.erinhoffman.com and on Twitter @gryphoness, and join the World of Andovar at www.facebook.com/andovar.world.
Loading...
or
Not Currently Available for Direct Purchase