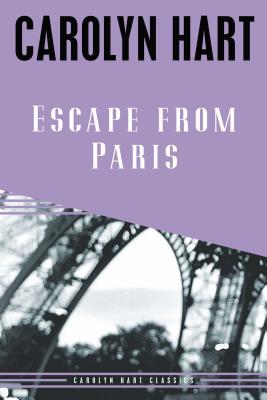 Romantic suspense amid the chaos of a world at war. The year is 1940. As England braces for invasion and the German army overruns Europe, two American sisters in Paris risk their lives to save a downed British airman from Nazi arrest. Linda Rossiter and Eleanor Masson soon realize the price they may pay when they read this ominous public notice: "All persons harbouring English soldiers must deliver same to the nearest Kommandantur not later than 20 October 1940. Those persons who continue to harbour Englishmen after this date without having notified the authorities will be shot." On Christmas Eve, the Gestapo sets a trap, and death is only a step behind the two American women.

“Set against the backdrop of occupied France, this is the thrilling story of two American sisters who risk everything to help British pilots evade capture. Three decades after it was originally published in an edited form, Carolyn Hart has released this edition as she originally wrote the novel, adding layers of complexity that leave the reader with a greater understanding of the desires that drive even the most unlikely people to greatness. Irresistible plotting, fabulous characters, and a roller-coaster pace demonstrate why Carolyn Hart is considered to be America’s Agatha Christie.”
—Robert Crais, author of Suspect

“Carolyn Hart’s riveting and realistic portrayal of German-occupied Paris keeps the suspense high. Set just before Germany declared war on America and just as the French Resistance started to emerge, Escape from Paris is a compelling page-turner.”
—Robin Burcell, bestselling author of The Black List

“A classic story, in classic style, from one of our real treasures. Yes, it’s a wonderful suspense novel. Yes, it’s authentic and gripping and heartbreaking. But this tensely taut tale of World War II courage, sacrifice, and love is brought back to life—after so many years!—by the incomparable style and inimitable talent of the beloved Carolyn Hart.”
—Hank Phillippi Ryan, author of The Other Woman

CAROLYN HART (Oklahoma City, OK) is the winner of multiple Agatha, Anthony, and Macavity Awards. She is a cofounder of Sisters in Crime. Her prolific career has included the enduring Death on Demand series as well as the Henrie O and Bailey Ruth books. In 2007, she received the Lifetime Achievement Award at Malice Domestic. She has published fifty mystery novels, including Dead, White and Blue(Berkeley Prime Crime, May 2013), the latest installment of the Death on Demand series. Visit her online at www.carolynhart.com and www.facebook.com/AuthorCarolynHart.
Loading...
or support indie stores by buying on