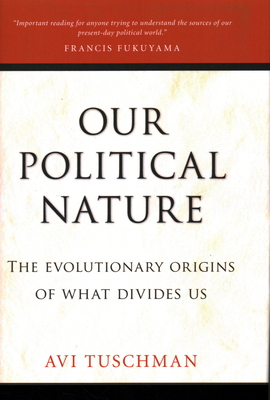 The Evolutionary Origins of What Divides Us

The first book to tell the natural history of political orientations.

Our Political Nature is the first book to reveal the hidden roots of our most deeply held moral values. It shows how political orientations across space and time arise from three clusters of measurable personality traits. These clusters entail opposing attitudes toward tribalism, inequality, and differing perceptions of human nature. Together, these traits are by far the most powerful cause of left-right voting, even leading people to regularly vote against their economic interests.

As this book explains, our political personalities also influence our likely choice of a mate, and shape society's larger reproductive patterns. Most importantly of all, it tells the evolutionary stories of these crucial personality traits, which stem from epic biological conflicts.

Based on dozens of exciting new insights from primatology, genetics, neuroscience, and anthropology, this groundbreaking work brings core concepts to life through current news stories and personalities. For instance, readers will meet Glenn Beck and Hugo Chavez and come to understand the underlying evolutionary forces they represent. By blending serious research with relevant contemporary examples, Our Political Nature casts important light onto the ideological clashes that so dangerously divide and imperil our world today.

Praise For Our Political Nature: The Evolutionary Origins of What Divides Us…

"Our Political Nature shows us that there are evolutionary underpinnings to our political attitudes, and that being liberal or conservative may reflect much deeper tendencies than we are inclined to think. This book is important reading for anyone trying to understand the sources of our present-day political world."
—FRANCIS FUKUYAMA, New York Times bestselling author of The Origins of Political Order

“At a time when unexpected political turmoil and economic crashes have exposed how feeble is our understanding of the forces that drive these crises, Our Political Nature provides a welcome respite from the intellectual confusion now reigning. In these pages Avi Tuschman offers a fascinating perspective on the deepest roots of the clashes that are changing our world.”
—MOISÉS NAÍM, author of The End of Power and former editor in chief of Foreign Policy

“In a remarkable interdisciplinary tour de force, evolutionary anthropologist Avi Tuschman integrates findings from social psychology, genetics, and neuroscience to provide a rich understanding of the polarization in politics throughout history, and of man’s inhumanity to man. In Our Political Nature he makes clear that be it vote choice or the decision to go to war, our politics are the product of the passions that drive us, which are deeply rooted in humanity’s evolutionary origins.”
—JERROLD M. POST, MD, Director, Political Psychology Program at George Washington University, and author of Leaders and Their Followers in a Dangerous World

Avi Tuschman (Washington, DC) is an expert on the hidden roots of political orientation. He began his career in politics as the youngest advisor in the government palace in Lima. While serving as the Senior Writer to President Alejandro Toledo (Peru, 2001-2006), Tuschman produced numerous articles and speeches designed to shape public opinion. In 2009, Dr. Tuschman joined hands with Toledo and seventeen other former presidents to co-write a regional policy agenda on democratic governance. UN Secretary General Ban Ki-moon lauded the document and called it historically unprecedented. Tuschman holds a B.A. and a Ph.D. in evolutionary anthropology from Stanford.
Loading...
or
Not Currently Available for Direct Purchase