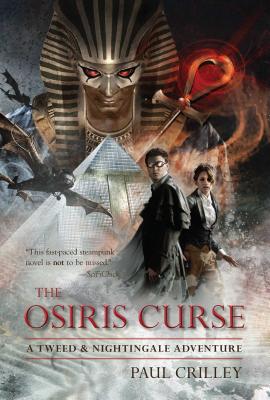 Steampunk Sherlock Holmes meets The X-Files with a dash of romantic tension and a large dose of adventure. When Nikola Tesla is murdered and blueprints for his super weapons are stolen, Tweed and Nightingale are drawn into a global cat and mouse chase with his killers. What's more, it seems that the people who shot Nikola Tesla are the same people responsible for Octavia's mother's disappearance. As the two cases intertwine, Tweed and Nightingale's investigations lead them to a murdered archeologist and a secret society called The Hermetic Order of Osiris. Fleeing the cult's wrath, they go undercover on the luxury airship, The Albion, setting out on her maiden voyage to Tutankhamen's View, a five star hotel built in the hollowed-out and refurbished Great Pyramid of Giza. In Egypt, the duo begin to unravel the terrible truth behind Tesla's death, a secret so earth-shattering that if revealed it would mean rewriting the entire history of the world. But if the cult's plans aren't stopped, Britain may lose the future.

Praise for The Lazarus Machine:

Born in Scotland in 1975, Paul Crilley moved to South Africa when he was eight years old. He was rather disappointed to find out that Africa was not at all like the Tarzan movies he had seen and that he would not, in fact, have elephants and lions strolling through his backyard. He now lives in a small village on the east coast with his family. He has written the Invisible Order series and numerous short stories, and he also writes for many types of South African television programs. He also worked on the MMO Star Wars: The Old Republic and recently wrote a comic miniseries for IDW.
Loading...
or
Not Currently Available for Direct Purchase