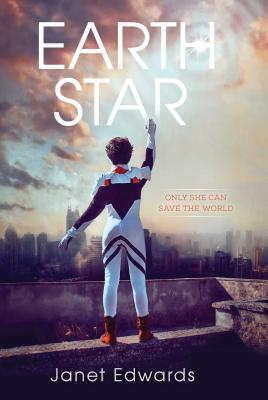 Romance, science fiction, action, and a look at the false assumptions we make about others combine in this light-hearted, fun, and well-conceived science fiction future. Only She Can Save the World. Eighteen-year-old Jarra has a lot to prove. After being awarded one of the military’s highest honors for her role in a daring rescue attempt, she finds herself—and her Ape status—in the spotlight. Jarra is one of the unlucky few born with an immune system that cannot survive on other planets. Derided as an “ape”—a “throwback”—by the rest of the universe, she is on a mission to prove that Earth Girls are just as good as anyone else. Except now the planet she loves is under threat by what could be humanity’s first ever alien contact. Jarra’s bravery—and specialist knowledge—will once again be at the center of the maelstrom, but will the rest of the universe consider Earth worth fighting for?

"Tired of bitter, angst-ridden heroines and their associated dark dystopias? Look no further than [this] refreshing debut." - Booklist STARRED REVIEW


"With a dash of action, sprinkling of romance, some teenage angst and a couple of collapsing skyscrapers, this novel contains everything you could possibly want to grab a teenage reader and keep them utterly enthralled." - Starburst

Janet Edwards is the author of Earth Girl (Pyr, March 2013). She grew up in prosaic England but also shared the lives of amazing people in fantastic worlds. Her guides were books written by authors, some still famous and some already forgotten. Those authors have hundreds of individual names, but they have one title in common. They were all Expert Dreamers. After growing bored with work involving tedious technical facts, Janet made a break for freedom through a magical wardrobe and is now training as an Apprentice Dreamer. She has a husband, a son, a lot of books, and an aversion to housework.
Loading...
or
Not Currently Available for Direct Purchase