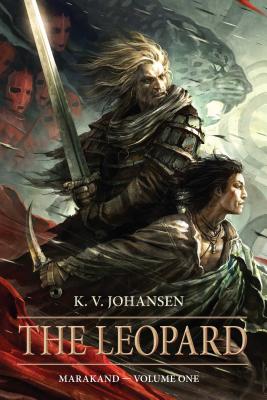 The Leopard (Gods of the Caravan Road #2)

Ahjvar, the assassin known as the Leopard, wants only to die, to end the curse that binds him to a life of horror. Although he has no reason to trust the goddess Catairanach or her messenger Deyandara, fugitive heir to a murdered tribal queen, desperation leads him to accept her bargain: if he kills the mad prophet known as the Voice of Marakand, Catairanach will free him of his curse. Accompanying him on his mission is the one person he has let close to him in a lifetime of death, a runaway slave named Ghu. Ahj knows Ghu is far from the half-wit others think him, but in Marakand, the great city where the caravan roads of east and west meet, both will need to face the deepest secrets of their souls, if either is to survive the undying enemies who hunt them and find a way through the darkness that damns the Leopard. To Marakand, too, come a Northron wanderer and her demon verrbjarn lover, carrying the obsidian sword Lakkariss, a weapon forged by the Old Great Gods to bring their justice to the seven devils who escaped the cold hells so long before.

Praise For The Leopard (Gods of the Caravan Road #2)…

“An involving and deftly written novel of escape and capture, love and loss, and battles both mental and physical.... Johansen’s writing style is assures and elegant, subtle and powerful.... Fans of C. J. Cherryh, Elizabeth Bear, and George R. R. Martin will find the same intelligence, wit, and mastery of language in The Leopard. K. V. Johansen has written a winner.”
-ForeWord Reviews

“There is something heart-warmingly old-fashioned about K.V. Johansen’s latest novel.... The fantasy genre is currently full to the brim with gritty and post-modern versions of A Game of Thrones or overly dark retellings of Lord of the Rings. The Leopard bucks this trend by drawing on a legacy of pulpy, swords and sandals-style tales reminiscent of The Wheel of Time series but with a classic edge that feels as if it’s come from the 1950s.”
-Starburst Magazine

K. V. Johansen is the author of Blackdog and numerous works for children, teens, and adults. She predominantly writes secondary-world fantasy but is also the author of some science fiction and literary criticism, and of a collection retelling medieval Danish ballads. With an artist friend, she is working on a manga-style adaptation of a short story set in the Blackdog world. Johansen has an MA from the Centre for Medieval Studies at the University of Toronto. Her lifelong interest in ancient and medieval history and the history of languages has had a great influence on her writing and world building. Occasionally, she masquerades as an editor, freelance journalist, or book reviewer, and dabbles (infrequently) in illustration.
Loading...
or
Not Currently Available for Direct Purchase