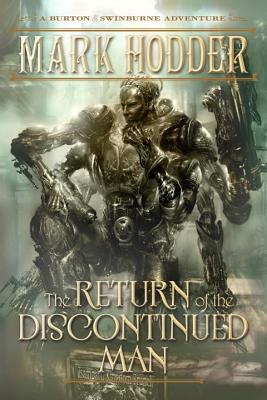 The Return of the Discontinued Man

SPRING HEELED JACK IS JUMPING BACK!

It's 9 p.m. on February 15, 1860, and Charles Babbage, the British Empire's most brilliant scientist, performs an experiment. Within moments, blood red snow falls from the sky and Spring Heeled Jack pops out of thin air in London's Leicester Square. Though utterly disoriented and apparently insane, the strange creature is intent on one thing: hunting Sir Richard Francis Burton!

Spring Heeled Jack isn't alone in his mental confusion. Burton can hardly function; he's experiencing one hallucination after another--visions of parallel realities and future history. Someone, or something, is trying to tell him about ... what?

When the revelation comes, it sends Burton and his companions on an expedition even the great explorer could never have imagined--a voyage through time itself into a twisted future where steam technology has made a resurgence and a despotic intelligence rules over the British Empire!

Praise For The Return of the Discontinued Man: A Burton & Swinburne Adventure…

"Hodder puts his knack for tall-tale spinning on full display, with such Victorian England celebrities as Herbert Spencer and H. G. Wells rubbing elbows with each other in one imaginative and enthralling scenario after another. Hodder's growing legion of fans won't be disappointed." - Booklist

Praise for The Secret of Abdu El Yezdi:

"Serious literary fun as Mark Hodder vaults to the front of the new steampunk writers pack.... Hard to imagine any lover of alternate British empires not being thoroughly amazed and entertained." - K. W. Jeter, author of Infernal Devices

Mark Hodder is the author of A Red Sun Also Rises and the Burton & Swinburne novels The Strange Affair of Spring Heeled Jack, The Curious Case of the Clockwork Man, Expedition to the Mountains of the Moon, and The Secret of Abdu El Yezdi. A former BBC writer, editor, journalist, and web producer, Mark left London, England, for Valencia, Spain, to de-stress and write novels. He has a degree in cultural studies and loves British history, good food, cutting-edge gadgets, Tom Waits, and a vast assortment of oddities. He's the creator and caretaker of the Blakiana website celebrating Sexton Blake, the most written-about fictional detective in English publishing history.
Loading...
or
Not Currently Available for Direct Purchase