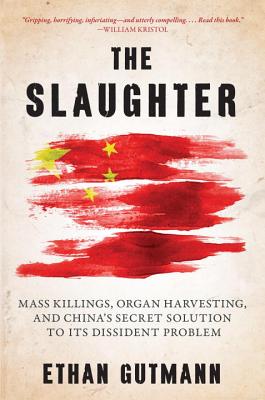 The inside story of China's organ transplant business and its macabre connection with internment camps and killing fields for arrested dissidents, especially the adherents of Falun Gong.

Mass murder is alive and well. That is the stark conclusion of this comprehensive investigation into the Chinese state's secret program to get rid of political dissidents while profiting from the sale of their organs--in many cases to Western recipients. Based on interviews with top-ranking police officials and Chinese doctors who have killed prisoners on the operating table, veteran China analyst Ethan Gutmann has produced a riveting insider's account--culminating in a death toll that will shock the world.

Why would the Chinese leadership encourage such a dangerous perversion of their medical system? To solve the puzzle, Gutmann journeyed deep into the dissident archipelago of Falun Gong, Tibetans, Uighurs and House Christians, uncovering an ageless drama of resistance, eliciting confessions of deep betrayal and moments of ecstatic redemption.

In an age of compassion fatigue, Gutmann relies on one simple truth: those who have made it back from the gates of hell have stories to tell. And no matter what baggage the reader may bring along, their preconceptions of China will not survive the trip.

Ethan Gutmann, an award-winning China analyst and human-rights investigator, is the author of Losing the New China: A Story of American Commerce, Desire and Betrayal. He has written widely on China issues for publications such as the Wall Street Journal Asia, Investor's Business Daily, Weekly Standard, National Review, and World Affairs journal, and he has provided testimony and briefings to the United States Congress, the Central Intelligence Agency, the European Parliament, the International Society for Human Rights in Geneva, the United Nations, and the parliaments of Ottawa, Canberra, Dublin, Edinburgh, and London. A former foreign-policy analyst at the Brookings Institution, Gutmann has appeared on PBS, CNN, BBC, and CNBC.

Praise For The Slaughter: Mass Killings, Organ Harvesting, and China's Secret Solution to Its Dissident Problem…

“Pity anyone who enters China's penal system…according to investigator Ethan Gutmann, whose expose rests on interviews with top police officials, doctors who have killed captives on the operating table, and torture survivors…”
– South China Morning Post

“…a vital step toward exposing a state-sanctioned practice.”
–Publishers Weekly

“He does the work of a thousand journalists…This book should shake us all.”
–Jay Nordlinger, National Review

“The book reads almost as a fiction novel...a macabre murder mystery. …In fact, the story is so appalling and the writing so compelling that the reader would much rather believe that it actually is fiction.”
– International Affairs Review

“Some chapters make for gruesome reading. All shout out the need for more international attention, investigation, and accountability.”
–Congressman Chris Smith, co-chair, Congressional-Executive Commission on China

“If the international community hasn’t been moved to action yet, Gutmann’s book just might do the trick.”
–Before It’s News

“Think hard, and consider “The Slaughter” by Ethan Gutmann. Warning: it’s not for the faint of heart.”
– The Bookworm

“…a social horror story of a medical community involved in the impossible. Any collection interested in Chinese culture, medicine and political issues will find this an important, key read.”
– Midwest Book Review

“…a shocking, but moving account of terrible crimes against humanity…”
–China Uncensored

“This book will be banned in China. And that is a tragedy.”
—Chen Guangcheng, Chinese civil rights activist