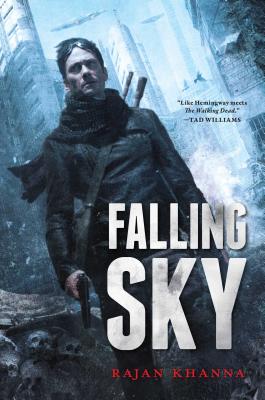 Ben Gold lives in dangerous times. Two generations ago, a virulent disease turned the population of most of North America into little more than beasts called Ferals. Some of those who survived took to the air, scratching out a living on airships and dirigibles soaring over the dangerous ground. Ben, a lone wolf, has reluctantly agreed to use his skills and his airship to help an idealist scientist, Miranda, on her search for a cure. Protecting her from Ferals is dangerous enough but when power-mad raiders run rampant, Ben finds himself in the most dangerous place of all—the ground. Ben’s journey leads him to Gastown, a city in the air recently conquered by belligerent and expansionist pirates. Old friends and new enemies are drawn into a struggle that quickly becomes a fight for the fate of the world. Ben must decide to focus on his own survival or risk it all on a desperate chance for a better future.

"Falling Sky grabbed me right away and held me to the last sentence. Khanna’s book is short, but sharp as a hidden knife. It’s a fast ride, scary and twisty-turny, and it also has plenty of airships, zombies, and sarcasm, three of the best things in the world. It’s also very well written—terse but punchy, like Hemingway meets The Walking Dead."

“A cool world with steampunk and zombies combined. . . . The voice is very real and gritty and I felt immersed in the world. Abercombie-edgy and a quick read at that.”

“Falling Sky is a gritty and gripping post-apocalyptic thriller, a noirish blend of Firefly and The Walking Dead—with a dash of Hayao Miyazaki. Welcome aboard the airship Cherub . . . your next stop: adventure!”

“Fast-paced and fiercely imaginative, Khanna’s debut is a different look at a dystopian future.”

—MUR LAFFERTY, author of the Shambling Guides series and winner of the 2012 John W. Campbell Award for Best New Writer