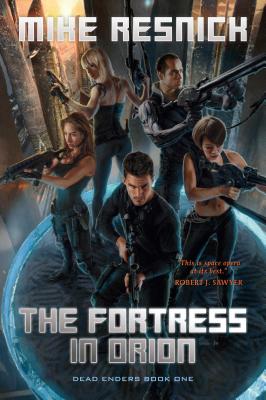 The Fortress in Orion (Dead Enders #1)

The Democracy is at war with the alien Traanskei Coalition. War hero Colonel Nathan Pretorius has a record of success on dangerous behind-enemy-lines missions, missions that usually leave him in the hospital. Now he's recruited for a near-impossible assignment that may well leave him dead. At the cost of many lives, the Democracy has managed to clone and train General Michkag, one of the Traanskei's master strategists. Colonel Pretorius and a hand-picked team must kidnap the real Michkag if they can, assassinate him if they can't, but no matter which, put the clone in his place, where he will misdirect the enemy's forces and funnel vital information to the Democracy. Against the odds, Pretorius, along with Cyborg Felix Ortega, computer expert Toni Levi, convict and contortionist Sally "Snake" Kowalski, the near-human empath Marlowe, the alien Gzychurlyx, and Madam Methuselah - the Dead Enders - must infiltrate the Fortress in Orion, accomplish their mission, and escape with their lives.

Praise For The Fortress in Orion (Dead Enders #1)…

PRAISE FOR FORTRESS IN ORION:

“This is space opera at its best—simultaneously pulse-pounding and mind-expanding. Resnick is our E. E. ‘Doc’ Smith, our Edgar Rice Burroughs: he is the twenty-first century’s master of excitement and adventure. Enjoy!”
—ROBERT J. SAWYER, Hugo Award–winning author of Red Planet Blues

“Mike Resnick is able to write deftly and poignantly about a broad spectrum of characters, exploring vast and colorful landscapes, all wrapped up in a highly entertaining story.”
—KEVIN J. ANDERSON, New York Times–bestselling author of The Dark between the Stars

“The Fortress in Orion is interstellar intrigue and derring-do of the old school. Dominic Flandry would feel right at home.”
—ERIC FLINT, author of the 1632 series

“Packed with colorful characters and endless invention, The Fortress in Orion is exciting entertainment that hurls along at nearly the speed of light. Someone should make a movie out of this book!”
—NANCY KRESS, award-winning author of Yesterday’s Kin

“If you’ve anything important to do over the next few days, don’t even start this.”
—JACK McDEVITT, Nebula Award–winning author of the Alex Benedict novels

PRAISE FOR THE WORK OF MIKE RESNICK:

"Resnick is a journeyman in a world of apprentices, one who knows his craft. His name on a book guarantees a solid story and believable characters, constructed with imagination and grace. Most important of all, it guarantees entertainment."
—RAYMOND FEIST, of the Magician trilogy

Mike Resnick has won an impressive five Hugos and has been nominated for thirty-one more. The author of the Starship series, the John Justin Mallory series, the Eli Paxton Mysteries, and four Weird West Tales, he has sold sixty-nine science fiction novels and more than two hundred fifty short stories and has edited forty anthologies. His Kirinyaga series, with sixty-seven major and minor awards and nominations to date, is the most honored series of stories in the history of science fiction.
Loading...
or
Not Currently Available for Direct Purchase