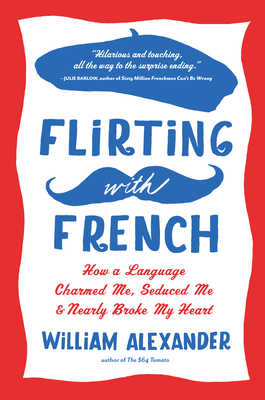 How a Language Charmed Me, Seduced Me, and Nearly Broke My Heart

“A delightful and courageous tale and a romping good read. Voila!” —Mark Greenside, author of I’ll Never Be French (No Matter What I Do)

William Alexander is more than a Francophile. He wants to be French. There’s one small obstacle though: he doesn’t speak la langue française. In Flirting with French, Alexander sets out to conquer the language he loves. But will it love him back?

Alexander eats, breathes, and sleeps French (even conjugating in his dreams). He travels to France, where mistranslations send him bicycling off in all sorts of wrong directions, and he nearly drowns in an immersion class in Provence, where, faced with the riddle of masculine breasts, feminine beards, and a turkey cutlet of uncertain gender, he starts to wonder whether he should’ve taken up golf instead of French. While playing hooky from grammar lessons and memory techniques, Alexander reports on the riotous workings of the Académie française, the four-hundred-year-old institution charged with keeping the language pure; explores the science of human communication, learning why it’s harder for fifty-year-olds to learn a second language than it is for five-year-olds; and, frustrated with his progress, explores an IBM research lab, where he trades barbs with a futuristic hand-held translator.

Does he succeed in becoming fluent? Readers will be as surprised as Alexander is to discover that, in a fascinating twist, studying French may have had a far greater impact on his life than actually learning to speak it ever would.

“A blend of passion and neuroscience, this literary love affair offers surprise insights into the human brain and the benefits of learning a second language. Reading William Alexander’s book is akin to having an MRI of the soul.” —Laura Shaine Cunningham, author of Sleeping Arrangements

“Alexander proves that learning a new language is an adventure of its own--with all the unexpected obstacles, surprising breakthroughs and moments of sublime pleasure traveling brings.” —Julie Barlow, author of Sixty Million Frenchmen Can’t Be Wrong

Praise For Flirting with French: How a Language Charmed Me, Seduced Me, and Nearly Broke My Heart…

“[Alexander] deals with a lot of pangs, yearnings and fears that readers, especially those around his age--57 when he set out to learn French--can identify with . . . The appeal of Flirting with French is not in the breathless descriptions of Paris or the bad puns in the chapter titles, but in the author’s amiable dunderheadedness as he delves into the culture, with all its confounding contradictions.” —The New York Times Book Review

“While language learners are a natural audience for this book, there is no prerequisite. Anybody who liked Alexander’s previous books or just likes to see an underdog try to beat the odds will enjoy this voyageur’s latest adventure.” —Minneapolis Star Tribune

“Alexander presents himself as an apprentice, but the reader quickly discovers he is also a master teacher . . . Alexander even manages a highly readable gloss of Noam Chomsky's linguistic theory, a feat of intellectual distillation akin to ‘Jacques Derrida for Dummies.’” —The Wall Street Journal

“A charming memoir by a passionate Francophile . . . Alexander's love affair with French, he concludes in this wry and warmhearted memoir, has reaped unexpected rewards.” —Kirkus Reviews

“Flirting with French is hilarious and touching, all the way to the surprise ending. In this 'travelogue' about learning French, William Alexander proves that learning a new language is an adventure of its own--with all the unexpected obstacles, surprising breakthroughs and moments of sublime pleasure traveling brings.” —Julie Barlow, author of Sixty Million Frenchmen Can’t Be Wrong

“Flirting with French is far more than a fling; it’s a deep love affair. A blend of passion and neuroscience, this literary love affair offers surprise insights into the human brain and the benefits of learning a second language. Reading William Alexander's book is akin to having an MRI of the soul. A surprise delight that will ignite desire in every reader.” —Laura Shaine Cunningham, author of Sleeping Arrangements