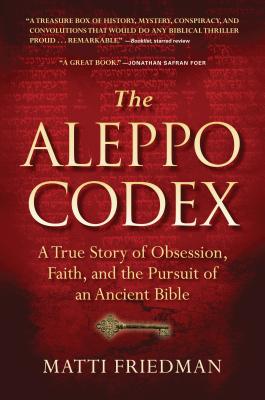 A thousand years ago, the most perfect copy of the Hebrew Bible was written. It was kept safe through one upheaval after another in the Middle East, and by the 1940s it was housed in a dark grotto in Aleppo, Syria, and had become known around the world as the Aleppo Codex.

Praise For The Aleppo Codex: A True Story of Obsession, Faith, and the Pursuit of an Ancient Bible…

Matti Friedman’s 2016 book Pumpkinflowers was chosen as a New York Times Notable Book and as one of Amazon’s 10 Best Books of the Year. It was selected as one of the year’s best by Booklist, Mother Jones, Foreign Affairs, the National Post, and the Globe and Mail. His first book, The Aleppo Codex, won the 2014 Sami Rohr Prize and the American Library Association’s Sophie Brody Medal. A contributor to the New York Times’ opinion page, Friedman has reported from Israel, Lebanon, Morocco, Moscow, the Caucasus, and Washington, DC, and his writing has appeared in publications such as the Wall Street Journal, the Atlantic, and the Washington Post. Friedman grew up in Toronto and now lives with his family in Jerusalem.
Loading...
or
Not Currently Available for Direct Purchase