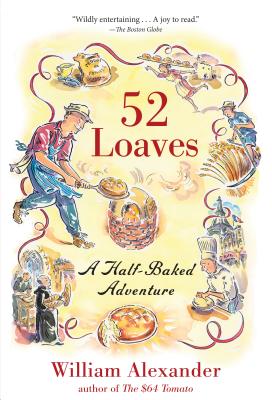 
"Nitpicking Obsessiveness was never so appetizing."
--Entertainment Weekly, Grade A-


“Alexander’s breathless, witty memoir is a joy to read. It’s equal parts fact and fun . . . Alexander is wildly entertaining on the page, dropping clever one-liners in the form of footnotes and parenthetical afterthoughts throughout.”
—The Boston Globe


“Nitpicking obsessiveness was never so appetizing. A-.” —Entertainment Weekly


“A warm, laugh-out-loud [memoir] . . . Alexander writes about the ups (few), the downs (numerous) and a lively history of bread itself, all recounted in a self-effacing but often irreverent voice . . . There is much to savor here, and Alexander entertainingly unravels many of the staff of life’s deep mysteries for the uninitiated.”
—The Oregonian


“The world would be a less interesting place without the William Alexanders who walk among us—the people who pursue all sorts of Holy grails and latch like ticks onto particular passions, yet who have the good grace to tell us all about their exploits with humor.” —Minneapolis Star Tribune