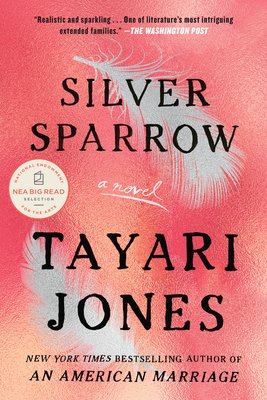 From the New York Times Bestselling Author of An American Marriage

With the opening line of Silver Sparrow, "My father, James Witherspoon, is a bigamist," author Tayari Jones unveils a breathtaking story about a man's deception, a family's complicity, and the two teenage girls caught in the middle.

Set in a middle-class neighborhood in Atlanta in the 1980s, the novel revolves around James Witherspoon's two families—the public one and the secret one. When the daughters from each family meet and form a friendship, only one of them knows they are sisters. It is a relationship destined to explode. This is the third stunning novel from an author deemed "one of the most important writers of her generation" (the Atlanta Journal Constitution).

“A tense, layered and evocative tale . . . Jones explores the rivalry and connection of siblings, the meaning of beauty, the perils of young womanhood, the complexities of romantic relationships and the contemporary African-American experience.”
—Minneapolis Star Tribune

“This is a complicated, heartbreaking and very rich story about how secret sisters find each other but lose as much as they gain in the process.”
—Michele Norris of NPR’s All Things Considered

“In Silver Sparrow—an amazing novel about a man with two families, one hidden and one public—Jones does something breathtaking and difficult: She renders a unique family dynamic with such precision and sensitivity that it becomes universal. It is amazing to watch, time and time again in this book, how Jones reveals the ways in which family both creates and destroys our identity.”
—Kevin Wilson in a Salon feature on writers’ favorite books of 2011

“Charting a vast emotional unknown is Tayari Jones’s compelling third novel, Silver Sparrow, in which a teenage girl’s coming of age in 1980s Atlanta is shadowed by her dawning understanding of a corrosive secret — her father’s second family.”
—Vogue

“The most immersive novel I read in 2011 . . . It’s one of those ‘just one more chapter’ kinds of books that require much last-minute changing of plans, because real life feels far less amusing, appalling, shocking, and loving than the world of its characters.”
—Slate

“An exciting read all the way through.”
—Chicago Tribune

“Tayari Jones has taken Atlanta for her literary terroir, and like many of our finest novelists, she gives readers a sense of place in a deeply observed way. But more than that, Jones has created in her main characters tour guides of that region: honest, hurt, observant and compelling young women whose voices cannot be ignored . . . Impossible to put down until you find out how these sisters will discover their own versions of family.”
—Los Angeles Times

“That Jones offers no pat answers is the secret sauce spicing Silver Sparrow. The prose goes down so compulsively that it might be easy to miss the heart of the story. She shines a light on a particular disenfranchised group, the children who grow up in second families.”
—The Denver Post

“Populating this absorbing novel is a vivid cast of characters, each with his own story . . . Jones writes dialogue that is realistic and sparkling, with an intuitive sense of how much to reveal and when.”
—The Washington Post

“Sharp as a blade, gleaming with ‘sense’ and humor. Her themes of legitimacy and secrets play out with symphonic, seemingly effortless resonance, and her indelible characters—one daughter a secret, discovered by the other—redefine love, loyalty, and betrayal in a New South only generations removed from slavery’s fracture. Jones is a master, and Silver Sparrow is a revelation, alive with meaning, heartbreak, and hope.”
—Jayne Anne Phillips, author of Lark and Termite

“Tayari Jones’s immensely pleasurable new novel pulls off a minor miracle . . . Subtly exploring the power of labels, Jones crafts an affecting tale about things, big and small, that we forfeit to forge a family. There are no winners in this empathetic and provocative story, only survivors.”
—More

“If your mom is a fan of emotionally charged morality tales (and whose mom isn’t?), she’s going to devour Tayari Jones’s third novel, Silver Sparrow, in a single sitting. Jones, a native Atlantan, once again mines her town for material and strikes serious pay dirt.”
—Essence

“Silver Sparrow grabs you with a first sentence that manages to be both matter of fact and mysterious and refuses to release you until she has finished a story that takes you deep into the lives of a family that is anything but ordinary. Graceful writing and careful attention to details have always been on display in Jones’s writing, but with this novel, she has found her own dazzlingly original voice, and in her hands, a sparrow suddenly becomes a soaring songbird.”
—Pearl Cleage, author of Till You Hear from Me

“Jones’ women . . . are all drawn well, from the sisters and their mothers to minor characters . . . Jones gives us permission to love all of [her novel’s] women, though they are flawed and often refuse to love each other. That’s a recipe for great book club discussions, and I wouldn’t be surprised to see Silver Sparrow featured in many.”
—Milwaukee Journal Sentinel

“This is a heartbreaking story of two sisters, unknown to each other at first, who find and love each other for a short time in their lives.”
—The Oklahoman

“Set in the 1980s with deft, understated detail, Silver Sparrow is a thoughtful story about bigamy, but it is also a lovely, realistic portrait of two teenage African-American girls, and an exploration of the bonds between mothers and daughters.”
—Chapter 16

“Through Jones’ spellbinding storytelling, the reader is pulled into the drama until the very last, heartwrenching page. Watch for this amazing book to be among the best of the year.”
—Wichita Falls (TX) Times Record News

“Jones—author of the acclaimed Leaving Atlanta and The Untelling—remains faithful to her characters. Both girls are fully developed and complex. The book is aptly titled; if God’s eye is on the sparrow, one can imagine the struggle each girl feels to believe that someone watches after her.”
—The Virginian-Pilot

“An old-fashioned page-turner that explores class and gender concerns, friendship, and the profound effect that parents have on their children and that loyalty has on love.”
—Pasatiempo

“If this book spoke aloud it would speak with a quiet, unsteady voice, one on the edge of tears . . . It’s like its narrators, sisters Dana and Chaurisse, each of whom sees herself as ordinary, not due much notice. Each envies those they call ‘Silver’—the shiny, beautiful, wanted people. Each views her world with a quiet, honest eye.”
—Paste magazine

“Silver Sparrow is rich, substantive, meaningful. It is also, at turns, funny and sharp, haunting and heartbreaking.”
—The Root

“The strength of this story lies in the complexity and ease in which the relationships are drawn. Jones has a beautiful way with words . . . This is one of my favorite books of 2011.”
—Color Online

“Jones reveals plenty about teenagers, class distinctions in black Atlanta, how men keep secrets and how women disclose them, and why people stay in relationships that work against their best interests.”
—Washington City Paper

“This is a precisely written, meticulously controlled work. It’s also one that leaves room for the messiness of fragmented lives—an impressive command of the craft at hand, and its paradoxes.”
—Vol. 1 Brooklyn

“Tayari Jones is a wise writer who presents Dana’s painful awareness of her outside status vividly in a straightforward graceful language that never gets in the way and manages to both entertain and provoke.”
—The Washington Independent Review of Books

“[An] expansive third novel . . . Jones effectively blends the sisters’ varied, flawed perspectives as the characters struggle with presumptions of family and the unwieldy binds of love and identity.”
—Booklist

“Jones has a gift for imagery, for plunking the reader down in the chaotic, swirling center of teenage territory.”
—ForeWord Reviews

“Silver Sparrow brings to mind John Irving in the ways it makes an epic story out of ordinary lives. The good, the bad, and the ugly all happen in this marvelously moving tale. Read this book! I can’t say it any more plainly than that.”
—Victor LaValle, author of Big Machine

“A graceful and shining work about finding the truth.”
—Library Journal, starred review

Tayari Jones is the author of four novels, including Silver Sparrow, The Untelling, and Leaving Atlanta. Jones holds degrees from Spelman College, Arizona State University, and the University of Iowa. A winner of numerous literary awards, she is a professor of creative writing at Emory University. Visit her website at www.tayarijones.com.

1. Could this story have had a happy ending?

2. Dana and Chaurisse both tell stories of what happened before they were born. What did you think of this technique? Are there stories about things that you cannot possibly remember that you feel almost like you witnessed?

3. There are many moments of truth in Silver Sparrow. What should Gwen have done when she discovered her pregnancy?

4. Gwen tells Dana that they have an advantage over Laverne and Chaurisse because they know the truth. Is this true?

5. Should Gwen have married Raleigh when she had the chance?

6. Is it possible to have a healthy relationship that is not monogamous?

7. There is so much talk these days about fatherhood—contrasting the deadbeat dad with the Bill Cosby-type father. How do you evaluate James Witherspoon, who is both?

8. Is Laverne’s life better or worse for having married James? What about Gwen?

9. Why do you think Raleigh is so loyal to James? Is this devotion warranted?

10. Tayari Jones often writes about the way real people interact with history, for example Gwen’s feelings about the death of Martin Luther King. What do you think of this technique? Have you interacted with history? How did it affect your personal story.

11. In the chapter, “Love and Happiness” there is an appearance of an actual historical figure—the woman who threw the grits on Al Green. Were you familiar with this story? If you were, did this chapter change your understanding of it?

12. Which of the characters was your favorite? Who would you like to know more about?