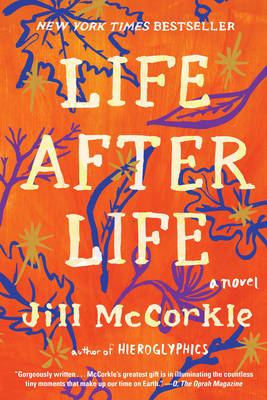 "Gorgeously written . . . McCorkle's greatest gift is in illuminating the countless tiny moments that make up our time on Earth."—O: The Oprah Magazine

Award-winning author Jill McCorkle takes us on a splendid journey through time and memory in this, her tenth work of fiction. Life After Life is filled with a sense of wonder at our capacity for self-discovery at any age. And the residents, staff, and neighbors of the Pine Haven retirement center (from twelve-year-old Abby to eighty-five-year-old Sadie) share some of life’s most profound discoveries and are some of the most true-to-life characters that you are ever likely to meet in fiction. Delivered with her trademark wit, Jill McCorkle’s constantly surprising novel illuminates the possibilities of second chances, hope, and rediscovering life right up to the very end. She has conjured an entire community that reminds us that grace and magic can—and do—appear when we least expect it.

Praise For Life After Life: A Novel…

"Who knew death, regret, and lengthy ruminations about days past could add up to a novel this vibrant, hopeful, and compelling? . . . Gorgeously written . . . McCorkle's greatest gift is in illuminating the countless tiny moments that make up our time on Earth." —O: The Oprah Magazine

“The elderly residents of Pine Haven live and yearn and challenge one another with an exuberance that jumps off the page.”—The New York Times “Home Garden” section

“Leave it to McCorkle to plumb the ultimate new beginning in this down-home, Southern-style Book of the Dead. Illuminating, reassuring, and enlarging our understanding of the crossing from this world to the next, her novel sings with the mystical, the magical and the fragility of this thing called life.” —The Atlanta Journal-Constitution

“Funny and painful, Life After Life explores not dying, but rather the mysteries of living — the second chances, the human connection, the love. The result is an impressive and poignant interweaving of vibrant characters; overlapping tales create a whole that is greater than the separate parts. McCorkle returns to the novel with a deeper wisdom and moral intensity. With a Southern flair, she invites the reader to muse on what matters most in the days we are given. Was it worth the wait? In a word, yes.” —Richmond Times-Dispatch

“A powerful gift for dialogue has always animated Jill McCorkle’s fiction, and here we hear some astonishing voices . . . As readers, we feel honored to witness their passages.” —The Boston Globe

Jill McCorkle’s first two novels were released simultaneously when she was just out of college, and the New York Times called her “a born novelist.” Since then, she has published six novels and four collections of short stories, and her work has appeared in Best American Short Stories several times, as well as The Norton Anthology of Short Fiction. Five of her books have been New York Times Notable books, and her most recent novel, Life After Life, was a New York Times bestseller. She has received the New England Booksellers Award, the John Dos Passos Prize for Excellence in Literature, and the North Carolina Award for Literature. She has written for the New York Times Book Review, the Washington Post, the Boston Globe, Garden and Gun, the Atlantic, and other publications. She was a Briggs-Copeland Lecturer in Fiction at Harvard, where she also chaired the department of creative writing. She is currently a faculty member of the Bennington College Writing Seminars and is affiliated with the MFA program at North Carolina State University.

The structure of this novel is unusual, with its many voices and viewpoints. Why do you think the author chose to narrate the story this way?

If you were asked to name the novel’s most central character, which would you choose? Why?

The last-moment-of-life monologues are interesting strokes of authorial imagination. How did you respond to them?

What does this novel imply about how people face death?

What are the societal consequences of remaining far removed from the process of dying?

How accurately do you think McCorkle portrays life in a continuing care retirement community?

How would you describe Sadie’s influence on her fellow Pine Haven residents?

How do you respond to Toby’s reasons for choosing Pine Haven? What about Rachel’s reasons?

How did your perception of Stanley change throughout the novel? Did you approve or disapprove of the way he dealt with his son’s involvement in his life? Why?

What about Marge? Does her characterization allow any room for the reader’s empathy?

What is your perception of Abby’s role in the novel?

Did you find any redeeming features in Kendra’s characterization? What about in Ben’s?

Did the novel’s ending surprise you? What ending might you have preferred?