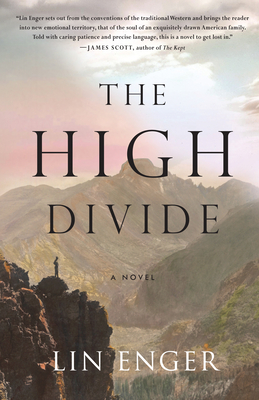 “A deeply moving, gripping novel about one man’s quest for redemption and his family’s determination to learn the truth . . .  Layered with meaning, this remarkable novel deserves to be read more than once. The High Divide proves Enger’s chops as a masterful storyteller.” —Ann Weisgarber, author of The Promise

In 1886, Gretta Pope wakes one morning to discover that her husband is gone. Ulysses Pope has left his family behind on the far edge of Minnesota’s western prairie with only the briefest of notes and no explanation for why he left or where he’s headed. It doesn’t take long for Gretta’s young sons, Eli and Danny, to set off after him, following the scant clues they can find, jumping trains to get where they need to go, and ending up in the rugged badlands of Montana.

Gretta has no choice but to search for her sons and her husband, leading her to the doorstep of a woman who seems intent on making Ulysses her own. Meanwhile, the boys find that the closer they come to Ulysses’ trail, the greater the perils that confront them, until each is faced with a choice about whom he will defend, and who he will become.

Enger’s breathtaking portrait of the vast plains landscape is matched by the rich expanse of his characters’ emotional terrain, as pivotal historical events--the bloody turmoil of expansionism, the near total demise of the bison herds, and the subjugation of the Plains Indians--blend seamlessly with the intimate story of a family’s sacrifice and devotion.

“Lin Enger sets out from the conventions of the traditional Western and brings the reader into new emotional territory, that of the soul of an exquisitely drawn American family. Told with caring patience and precise language, The High Divide is a novel to get lost in.” —James Scott, author of The Kept

“The High Divide, a novel about a family in peril, is haunting and tense but leavened by considerable warmth and humanity. Lin Enger writes with durable grace about a man’s quest for redemption and the human capacity for forgiveness.” —Benjamin Percy, author of Red Moon

Which one of the four members of the Pope family do you see as the novel’s main character? Why?

Why do you think Eli goes off in search of his father instead of staying home to help his mother as she asks him to do?

How does the relationship between Danny and Eli change as the two of them travel west to find their father?

Which, if any, of the novel’s characters seem to have seen through Ulysses’s veneer to the man he really is?

What does Gretta learn about herself in the course of her trials and travels? At what points in the story does she seem most able to tap her own strengths and affect her and her family’s future?

How would you characterize Mrs. Powers? Is she merely opportunistic? Would you consider her admirable in any sense?

After listening to the startling information that Ulysses has come to tell him, why does Magpie allow Ulysses to simply walk away?

Why does Eli sneak away from his father and return to Magpie, Bull Bear, and Leathertop’s camp? In doing so, what does he accomplish?

In what ways does Danny manage to change the course of his family’s history? How might you explain his apparently renewed health at the story’s end?

To what degree does Ulysses finally experience the catharsis he is seeking with his journey to the West and into his past?