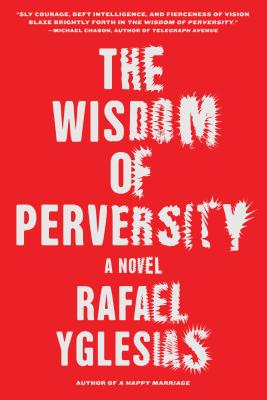 The Wisdom of Perversity

I should have told. Julie’s right: I would have saved dozens of others. Jeff, Julie, Sam, the academy kids, the Huck Finn boys, everyone else was ignorant or greedy or scared or confused or overwhelmed by bullies, but I was strong enough—I could’ve pushed him away. I did push him away. I saved myself and let everyone else suffer. Me and the god of creation—we’re the villains of this story.

Brian and Jeff were best friends, growing up together in New York City in the late 1960s. Then something happened that drove a wedge between them, ending both their friendship and their childhood, something that neither ever spoke about . . . at least until their shared secret resurfaced some forty years later, forcing them to reunite and, along with Jeff’s cousin Julie, to face the consequences of their years of silence.

In The Wisdom of Perversity, Rafael Yglesias, the critically acclaimed, bestselling novelist and screenwriter and the author of A Happy Marriage, winner of the Los Angeles Times Fiction Prize, and Fearless, the basis for the cult film by the same name, has crafted a novel that tells the stories of three childhood friends who join together as adults to acknowledge the ways in which their lives were altered by the actions of a predator, a predator who now, many years later, has been exposed by more recent victims yet is on the verge of escaping punishment--thanks to his wealth and influence.

Damaged in different ways by the events of the past but all sharing the same feelings of guilt and anger for allowing this man to go unpunished, leaving him free to abuse others, Julie, Jeff, and Brian band together to force a public outcry that will assure that he will finally face justice. With a tone that cleverly mixes humor with stark reality, The Wisdom of Perversity is a groundbreaking novel that by giving a voice to the youthful victims of sexual abuse will inspire both praise and debate.

“Many contemporary works of fiction are bold,but few are this courageous . . . Rafael Yglesias has written a frightening, evocative, and intensely compassionate novel that manages somehow to do the impossible,shedding light on one of the darkest corners of this human theater.” —Helen Schulman, author of This Beautiful Life

“The sly courage, the deft intelligence, and the fierceness of vision that we, his fans, have come to expect from a Raphael Yglesias novel all blaze brightly forth—and cast very dark shadows—in The Wisdom of Perversity.” —Michael Chabon, Pulitzer Prize–winning novelist


Praise For The Wisdom of Perversity…

“‘Childhood was the ideal soft metal for the permanent engravings of evil.’ This beautifully, bleakly precise statement occurs early in Rafael Yglesias’s painful and candid new novel about the consequences, seemingly irremediable, of childhood sexual molestation…From the perspective of three child victims, The Wisdom of Perversity bravely dramatizes and confronts these issues in the plainest language possible. Here is the antithesis of Nabokov’s Lolita…set beside the grim literalness of The Wisdom of Perversity, as beside any case history of sexual abuse, Lolita is a lark, an extravagance, a phantasm of romance, a tour de force, a jubilant metaphor. Yglesias has known the real thing, and has chosen not to refashion it into anything other than itself.” —Joyce Carol Oates for The New York Times Book Review

“The sly courage, the deft intelligence, and the fierceness of vision that we, his fans, have come to expect from a Rafael Yglesias novel all blaze brightly forth--and cast very dark shadows--in The Wisdom of Perversity.” —Michael Chabon, author of Telegraph Avenue

“Child molestation is an ugly subject event when seen from a distance, and Yglesias pulls the readers inside the children’s heads. The outrage is intense . . . This makes the reader feel exactly what the girl feels: violated. Not that it ever happened to me--but it could have. If I hadn’t told.” —Miami Herald

“Yglesias delivers a powerful message about victimization, healing, and empowerment in a novel that is as timely as it is poignant.” —Booklist

“Many contemporary works of fiction are bold, but few are this courageous. With The Wisdom of Perversity, Rafael Yglesias has written a frightening, evocative, and intensely compassionate novel that manages somehow to do the impossible, shedding light on one of the darkest corners of this human theater.” —Helen Schulman, author of This Beautiful Life

“[A]n affecting novel that is big-screen lurid without being superficial or too slick . . . [with] a touch of Agatha Christie-like mystery.” —Kirkus Reviews—Review quotes

Rafael Yglesias is a novelist and screenwriter, the son of writers Jose Yglesias and Helen Yglesias, who instilled in him the need to aim for psychological realism in his writing. Raised in Manhattan, he dropped out of high school to finish his first novel, Hide Fox, and All After, which was published in 1972. After writing three novels by the age of twenty-one, he stopped writing books between 1976 and 1984 and concentrated on starting a family, making a living by writing screenplays, none of which was produced. He returned to novels in 1986 with Hot Properties, followed by Only Children in 1988, The Murderer Next Door in 1990, Fearless in 1993, and Dr. Neruda’s Cure for Evil in 1996. He also resumed writing screenplays, with the first to be produced, Fearless, based on his own novel. In all he has had five films produced. After the publication of Dr. Neruda’s Cure for Evil, Yglesias took another break from writing novels, mostly because of the illness and death of his wife. He returned to novels with the publication of A Happy Marriage, an autobiographical story of his first marriage. It was awarded the 2009 Los Angeles Times Book Prize for Fiction and became a bestseller. His website is www.rafaelyglesias.com.
Loading...
or
Not Currently Available for Direct Purchase