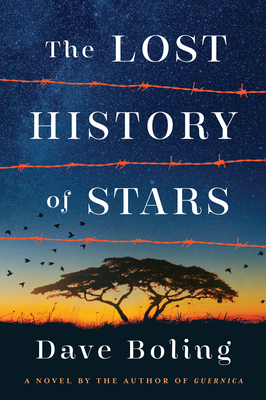 The Lost History of Stars (Hardcover)

A Novel By The Author Of Guernica

From a forgotten moment in history comes an inspiring novel about finding strength and courage in the most unimaginable places.

In turn-of-the-century South Africa, fourteen-year-old Lettie, her younger brother, and her mother are Dutch Afrikaner settlers who have been taken from their farm by British soldiers and are being held in a concentration camp. It is early in the Boer War, and Lettie’s father, grandfather, and brother are off fighting the British as thousands of Afrikaner women and children are detained. The camps are cramped and disease ridden; the threat of illness and starvation are ever present. Determined to dictate their own fate, Lettie and her family give each other strength and hope as they fight to survive amid increasingly dire conditions.

Brave and defiant, Lettie finds comfort in memories of stargazing with her grandfather, in her plan to be a writer, and in surprising new friendships that will both nourish and challenge her. A beautiful testament to love, family, and sheer force of will, The Lost History of Stars was inspired by Dave Boling’s grandfather’s own experience as a soldier during the Boer War. Lettie is a figure of abiding grace, and her story is richly drawn and impossible to forget.

Dave Boling, a sports writer based in Seattle, is the author of one previous novel, the critically acclaimed Guernica.

Praise For The Lost History of Stars: A Novel By The Author Of Guernica…

“The Lost History of Stars is a heart-wrenching yet ultimately uplifting story of an extraordinary young woman and her family, who are forced to endure unimaginable hardship at the hands of a brutal war. Dave Boling’s brilliant novel is a meditation on the resiliency of the soul and the spirit, and will long be remembered.”
—Garth Stein, author of A Sudden Light and The Art of Racing in the Rain

“Dave Boling has a rare gift for finding humanity in historical fiction. His new novel, The Lost History of Stars, is another gripping tale about living in war’s barbaric shadow, and how moments of decency and heroism and glimpses of the natural world sustain us.”
—Jess Walter, author of Beautiful Ruins

“If history is written by the victors, this may explain why so little is known about the travails of the Boers, Dutch colonists of South Africa, against the British….The novel sheds much-needed light on the deaths of thousands of Boer civilians in these camps. A valuable testament providing glimmers, however scant, of hope for humanity.”
—Kirkus Reviews

“The author of the award-winning Guernica returns with a compelling story of war, violence, and tragedy . . . Fluctuating from a nostalgic past to a present filled with uncertainty, this story gives a touching and detailed perspective on a cruel war in which children are the innocent victims. This beautifully narrated work will appeal to fans of both historical and general fiction.”
—Library Journal

“[Boling’s] informative and illuminating story is heartfelt and deeply affecting in its dramatization of a historic episode too little known here.”
—Booklist

“Centering on the maturation of a relatable protagonist, this well-written work . . . spotlights a military conflict rarely covered in fiction.”

“Prepare to be immersed in the story. Boling has based his novel on his grandfather’s experience as a camp guard for the British Army during the war. He portrays the women’s strength in dealing with life-and-death struggles and their loss of freedom while trying to provide a home for their family. This story will remain with you long after you have finished the book.”
—Historical Novels Review
or support indie stores by buying on
Copyright © 2020 American Booksellers Association