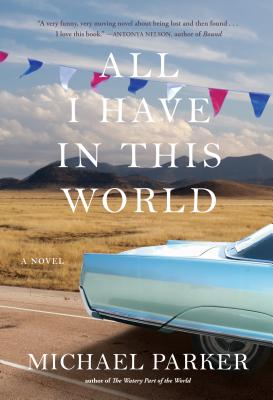 All I Have in This World

“A very funny, very moving novel about being lost and then found . . . I love this book.”
—Antonya Nelson, author of Bound


Two strangers meet over the hood of a used car in Texas: Marcus, who is fleeing both his financial and personal failures, and Maria, who after years of dodging her mistakes has returned to her hometown to make amends. One looking forward, the other looking back, they face off over the car they both want. And after knowing each other for less than an hour, they decide to buy it together. All I Have in This World is a different kind of love story about the power of friendship.

“A Springsteenian ode to the promise and heartbreak of the highway.” —The New York Times

“Both poetic and starkly real . . . All I Have in This World charts the emotional and geographic journey of two people trying valiantly to move forward.” —The Raleigh News and Observer


Praise For All I Have in This World: A Novel…

“Springsteenian ode to the promise and heartbreak of the highway . . . Told with . . . emotional complexity and subtlety.” —The New York Times

“This is a very funny, very moving novel about being lost and then found, about that rarest gift--shared sensibility--and about being saved . . . I love this book.” —Antonya Nelson, author of Bound

“Parker's skillfully rendered story rolls like a restless, unpredictable west Texas river--calm depths here, turbulent shallows there--as Marcus and Maria communicate (sometimes with words, sometimes with silence, almost always in the car) and lurch toward an imperfect union. This makes Parker's story remarkable. But what makes All I Have in This World memorable is this: While any number of disasters can (and do) take place along the way, and while some are heartbreaking, the watershed moments happen not with sadness or blood or pain, but with cascades of laughter. It's through moments of unabashed humor, when Marcus and Maria let go and laugh, that his characters finally, and completely, connect. Which feels a lot like real life.” —The Denver Post

“Don’t pass by Michael Parker’s book about a 'low-slung sky-blue 1984 Buick Electra' without kicking its tires, so to speak--it’s no lemon but a sweet, sinuous, and smart love story.” —Washingtonian magazine’s blog

“The writing is direct, the characters vivid . . . In All I Have in This World, Parker, in prose clear as the Texas summer sky, gives us a portrait of two people who have tried their best to find themselves by running, literally from home or mentally from logic and good sense. Long may that Electra run.” —Austin American-Statesman

“Parker deftly captures his characters’ uncertainties and hesitations as they struggle to move away from regret and toward the absolution they so desire.” —Booklist

“Parker is an assured and emotionally sensitive writer.” —Kirkus Reviews

“'Michael Parker's best novel yet. In front seats and back seats we conjure love and contemplate ruin, as do the wonderful characters in All I Have in This World. Parker again extends his geographical and emotional ranges here in this layered and nuanced story of heartbroken, debt-ridden and atonement-seeking creatures much like many of us. So get in and drive on.” —Mark Richard, author of House of Prayer No. 2

Michael Parker is the author of seven novels and three collections of stories. For his work, he has been awarded four career-achievement awards: the Hobson Award for Arts and Letters, the North Carolina Award for Literature, the R. Hunt Parker Award, and the 2020 Thomas Wolfe Prize.  His short fiction and nonfiction have appeared in the Washington Post, the New York Times, Oxford American, Runner’s World, Men's Journal, and others. He is a three-time winner of the O.Henry Prize for his short fiction and his work has appeared in dozens of magazines and several anthologies.  He taught for twenty-seven years in the MFA Writing Program at the University of North Carolina at Greensboro, and since 2009 he has been on the faculty of the Warren Wilson Program for Writers. He lives in Austin, Texas.