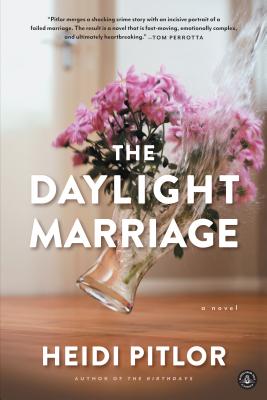 “Hypnotically readable—absolutely couldn't put it down . . . This book is terrific.” —Stephen King

Hannah was tall and graceful, naturally pretty, spirited and impulsive, the upper-class young woman who picked, of all men, Lovell---the introverted climate scientist who thought he could change the world if he could just get everyone to listen to reason. After a magical honeymoon, they settled in the suburbs to raise their two children.

“The novel’s easy blending of crime and family narrative deftly cracks open the closed world of Lovell and Hannah’s marriage. In this exploration of a woman lost, and a lost love, Pitlor exposes every secret -- frustrations, weaknesses, ugliness -- to the harsh light of day.” —Toronto Star

“In this captivating and emotionally stirring new mystery that, dare I say, may even be better than Gone Girl . . . A riveting psychological thriller that let’s you work out your darkest fears with a gay twist? Yes, please!” —Advocate.com

Heidi Pitlor is the author of the novels The Birthdays and The Daylight Marriage. She has been the series editor of The Best American Short Stories since 2007 and the editorial director of Plympton, a literary studio. Her writing has been published in the New York Times, the Boston Globe, the Huffington Post, Ploughshares, and the anthologies It Occurs to Me That I Am America: New Storiesand Art and Labor Day: True Birth Stories by Today’s Best Women Writers. She lives outside Boston.

Why do you think Lovell and Hannah chose the jobs that they did? How do their jobs

contribute to their fates?

The author chose to tell this story from two points of view. What did this narrative choice add

Why do you think Lovell and Hannah ended up getting married and staying together, even

after their incompatibilities became clear to them?

How does Lovell’s work serve as a metaphor for what happens elsewhere in his life?

Do you think Hannah’s fate was wholly accidental, or did she have some small say in it? Do

you think she was entirely unaware of the danger she faced on the beach?

What role do the neighbors, Stephen and Jeff, play in this book? Without them, what would be

What does the title mean to you?

Is Lovell a reliable character? Why or why not?

How does the author build suspense in this novel?

What does danger mean to Hannah? Why was it necessary to her?

Why wasn’t Lovell more receptive to the therapist, Dr. Valmer? Why weren’t the kids?

The members of the Hall family often chide each other for their language. What roles do

language and swearing have in this book?

What does Janine think has happened to her mother? How does this change throughout the

Hannah once asked Lovell, “Do you ever get sick of trying to predict the precise movement

of every molecule in the atmosphere? When you look so close at something, doesn’t it start to

disappear? Doesn’t it lose its fundamental it-ness?” (page 184). What does this mean to you?

What do you think Hannah was talking about, beyond Lovell’s work?