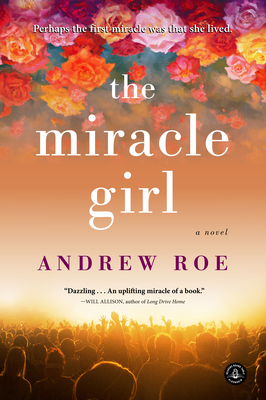 Perhaps the first miracle was that she lived.

The crowds keep coming. They arrive, all with their reasons, all with their doubts and certainties and everything in between. More and more every day, drawn by rumor and whisper and desperate wish. They come to Shaker Street to see eight-year-old Anabelle Vincent, who lies in a coma-like state--unable to move or speak. They come because a visitor experienced what seemed like a miracle and believed it happened because of Anabelle. Word spreads. There are more visitors, more supposed miracles, more stories on TV and the Internet. But is this the divine at work or something else?


Praise For The Miracle Girl: A Novel…

“[An] assured debut . . . Overfamiliarity has diluted the significance of the word ‘miracle’--used to describe diets, cures, even sandwich spread--but Roe suggests that the miraculous is a perpetual human craving. The Miracle Girl is a hopeful meditation on the mysteries of faith.” —The New York Times Book Review

“A treatise on modern religion and theology as well as a stunning exegesis of the world beyond our empirical nature, it is above all a wonderful study and story of the multi-faceted, often miraculous sides of human nature.”—Author Exposure

“Roe creates characters who feel real, who are beautiful and flawed and full of desire and regret and love and pain. He brings us into a world where terrible things happen to ordinary people and it’s hard not to want a miracle girl to save them. And, because we recognize this world, we want that miracle girl to be real, to save us, too.” —Arizona Daily Sun

“Roe’s exploration of the need for belief makes for a strong debut.” —Booklist

“While the novel features a cast of lovable losers and fortune's fools right out of a Nathanael West novel, Roe's takes on hope, faith, and our willingness to believe makes The Miracle Girl a memorable debut.”—San Diego CityBeat

“Andrew Roe’s novel struggles to contain the breadth of the author’s talent. There is a precision and purpose in each sentence. The characters are steeped in complexity. These are people we all know, struggling with both the familiar and the magnificent. A stunning and captivating debut.” —Jason Mott, author of The Wonder of All Things

“To believe or not to believe--that is the question facing all who are touched by Annabelle, the comatose ‘miracle girl’ at the swirling center of Andrew Roe's dazzling debut. But The Miracle Girl is more than an exploration of the mysteries of faith. It's also the unforgettable story of one family's struggle against tragedy. The result is an uplifting miracle of a book.” —Will Allison, author of Long Drive Home

“In Andrew Roe's The Miracle Girl, we're reminded that the desire for miracles always connotes dissatisfaction, even as it articulates a hope. Roe deftly explores this paradox with clean, sharp prose; the novel's intuitive, shifting structure (providing not only different character's perspectives but press releases, documents, and, really productively, comments on web message boards) generates a multifaceted exploration into what it means to believe. Also, Roe's novel examines the strange responsibility of being believed in. A stunning, confident debut.” —Peter Rock, author of The Shelter Cycle

“Look at Andrew Roe’s The Miracle Girl from one angle and you’ll see an incisive and insightful critique of America at the millennium and today, investigating where we put our faith and why. The greatest of Roe’s achievements in this captivating debut is a memorable feat of intense empathy. Roe inhabits characters who are desperate to believe and reveals to us their needs and wounds and hopes, and he does so with kindness, generosity, and wisdom. This is a novel about what it means to be human, to seek connection and hope and maybe even transcendence in the world around us.” —Doug Dorst, co-author of S

Born and raised in the Los Angeles suburb of Whittier, California, Andrew Roe has had his fiction published in Tin House, One Story, the Sun, Glimmer Train, The Cincinnati Review, Slice, Pank, Avery Anthology, Gigantic, Freight Stories, Failbetter, the Good Men Project, and other literary magazines, as well as the anthologies Where Love Is Found and 24 Bar Blues. His nonfiction has appeared in the New York Times, San Francisco Chronicle, Salon.com, SF Weekly, San Francisco Bay Guardian, and elsewhere. An alumnus of the Squaw Valley Community of Writers and Tin House Writer’s Workshop, he has received scholarships from the Getty Foundation and the San Francisco Foundation. Three of his short stories were performed by actors as part of the New Short Fiction Series, LA’s longest running spoken word series. Dan Chaon selected his story “Job History” for the Wigleaf Top 50 Very Short Fictions of 2012, and he has been nominated for the Pushcart Prize multiple times, including a One Story nomination for his story “America’s Finest City.” He earned a bachelor of arts degree in English/creative writing from San Diego State University, and a master of arts degree in literature from San Francisco State University. For over twenty years, he has worked as a writer and editor in the publishing and software industries. A member of PEN Center USA, he currently lives in Oceanside, California, with his wife and three children.
Loading...
or
Not Currently Available for Direct Purchase