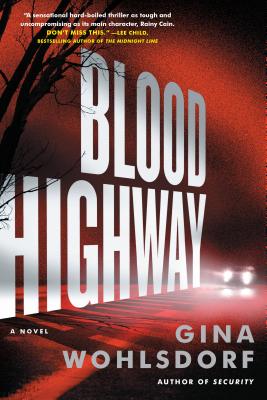 Meet Rainy Cain, a tough, smart seventeen-year-old whose primary instinct is survival. That instinct is tested when her life is upended by the sudden appearance of her father, Sam, who she thought was long dead, but instead had been in prison for his part in an armored truck robbery gone murderously wrong. Now escaped and on the run, he kidnaps Rainy, who he is convinced knows where the money from the robbery, never recovered, is hidden.

Accompanied by a henchman with secret motives of his own, they set off on a cross-country dash to Big Sur, where Sam suspects his late wife stashed the cash. On their heels is a Minneapolis cop intent on bringing Rainy safely home.

It is an odyssey that will push Rainy to the limits of endurance, and that will keep readers guessing until the very end. What does Rainy really know—and what is she willing to sacrifice in order to live?

Praise For Blood Highway: A Novel…

“A sensational hard-boiled thriller as tough and uncompromising as its main character, Rainy Cain. Don’t miss this.”
—Lee Child, bestselling author of The Midnight Line

“A powerful thriller . . . This intense story can be painful to read, but it’s more than worth the ride.”
—Publishers Weekly, starred review

“I may never be as casually badass as Gina Wohlsdorf is, but I can dream. Her prose is dazzling; her narrator—Rainy, a Minnesota high schooler—is grittier than hard-boiled true-crime-recounting cops, but also funny, and incredibly hard yet incredibly human, and still a plausible high schooler. Some readers will claim they ‘fell in love’ with her. Rainy would kick those readers in the balls.”
—Edgar Cantero, bestselling author of Meddling Kids

“Rainy’s complicated survival mechanisms, the deep schism between who she is and what people see, and the profound strangeness and violence of life with her mother make her a uniquely compelling character. She has a distinct voice and a dark, dry humor that brings much-needed relief to the extended nightmare she endures . . . The fast-paced novel maintains its intensity until the end. A memorable young protagonist already accustomed to lies and chaos finds new depths to both.”
—Kirkus Reviews

“Wohlsdorf follows up her conceptually complex debut, Security, with the opposite, a minimalist thriller with a story line that is simplicity itself: a girl on the run with some bad guys . . . Impressively upsetting.”
—Booklist

“Almost certainly will be my favorite book of 2016 . . . Security is touching, violent, suspenseful, humorous, and literary . . . Do. Not. Miss. This. One.”
—Bookreporter.com

Gina Wohlsdorf, whose first novel, Security, was praised as “witty,” “chilling,” “kinky,” and “stunning,” lives in Colorado. Blood Highway is her second novel.
Loading...
or
Not Currently Available for Direct Purchase