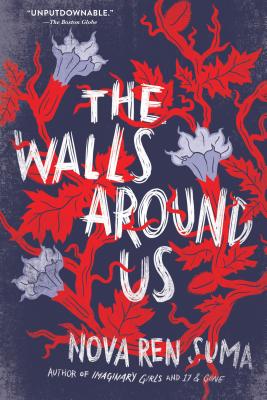 The Walls Around Us

“With evocative language, a shifting timeline and more than one unreliable narrator, Suma subtly explores the balance of power between the talented and the mediocre, the rich and the poor, the brave and the cowardly . . . To reveal more would be to uncover the bloody heart that beats beneath the floorboards of this urban-legend-tinged tale.” —The New York Times

The Walls Around Us is a ghostly story of suspense told in two voices--one still living and one dead. On the outside, there’s Violet, an eighteen-year-old ballerina days away from the life of her dreams when something threatens to expose the shocking truth of her achievement. On the inside, within the walls of a girls’ juvenile detention center, there’s Amber, locked up for so long she can’t imagine freedom. Tying these two worlds together is Orianna, who holds the key to unlocking all the girls’ darkest mysteries: What really happened on the night Orianna stepped between Violet and her tormentors? What really happened on two strange nights at Aurora Hills? Will Amber and Violet and Orianna ever get the justice they deserve--in this life or in another one?

Praise For The Walls Around Us…

“[An] Intricately plotted psychological horror story . . .  With evocative language, a shifting timeline, and more than one unreliable narrator, Suma subtly explores the balance of power between the talented and the mediocre, the rich and the poor, the brave and the cowardly--and the unpleasant truths that are released when these scales are upset.” —New York Times Book Review

“[A] supernatural page-turner . . . In [Suma’s] story, some people are guilty and damnable, and some are innocent and good -- and the ones who fall in between are simply innocuous. This stark character classification isn’t a flaw, but rather, a demonstration of Suma’s fantastic writing. Her images, even the horrible ones, linger like dust and glitter after an epic stage performance.” —The Boston Globe

“Gripping. . . Just try to put this down.” —Shelf Awareness for Readers, starred review

“ [A] powerful novel . . . The compelling narrative, written in scintillating prose and featuring incredibly real characters, brings the two stories together in an explosive finale with a supernatural twist that results in a satisfying resolution to the struggle between the guilt and evil depicted here.” —VOYA

“The Walls Around Us passionately testifies to the ways in which girls are walled up, held down, fenced in. It's a gorgeously written, spellbinding ghost story forged from ugly reality. . . ‘Everything I know about bombs tells me they are built to explode,’ Amber observes at one point. Nova Ren Suma's prose hums with such power and fury that when the explosions do happen, they seem unavoidable.” —Chicago Tribune

“A tour-de-force packing immense emotional power . . .  Suma takes risks here that few authors are capable of, and most readers do not dare hope for.”—Locus Magazine

“Suma craftily sets the two stories against one another, moving between Violet’s fiercely grounded account and Amber’s hauntingly destabilized one, enticing readers to figure out how the pieces go together . . . Readers who loved the author’s spooky but redemptive 17 Gone) and who are looking for something a little more vengeful will curl up happily with this.”—BCCB, starred review

"A suspenseful tour de force, a ghost story of the best sort, the kind that creeps into your soul and haunts you." —Libba Bray, author of The Diviners and A Great and Terrible Beauty

"Fearlessly imagined and deliciously sinister, The Walls Around Us is hypnotic, luring the reader deeper and deeper into its original, shocking narrative." —Michelle Hodkin, author of The Mara Dyer Trilogy

"The wholly realistic view of adolescents meeting the criminal justice system is touched at first with the slimmest twist of an otherworldly creepiness, escalating finally to the truly hair-raising and macabre. Eerie, painful and beautifully spine-chilling." —Kirkus Reviews, starred review

"Written in luscious and deliciously creepy prose not easy to forget . . . This is a story about guilt and innocence, about secrets and how deep we let people into those places within us, and it’s a story about how the past can define our present, even if we try desperately to keep that past under wraps. Put it on your radars now; this is an outstanding literary young adult novel more than worth the wait." —Book Riot

"In lyrical, authoritative prose, Suma weaves the disparate lives of [the] three girls into a single, spellbinding narrative that explores guilt, privilege, and complicity with fearless acuity . . . The twisting, ghostly tale of Ori’s life, death, and redemption is unsettling and entirely engrossing." —The Horn Book Magaine, starred review

Nova Ren Suma is the author of the #1 New York Times bestselling The Walls Around Us, which was an Edgar Award finalist. She also wrote Imaginary Girls and 17 & Gone and is co-creator of FORESHADOW: A Serial YA Anthology. She has an MFA in fiction from Columbia University and teaches writing at Vermont College of Fine Arts and the University of Pennsylvania. Originally from the Hudson Valley, she spent most of her adult life in New York City and now lives in Philadelphia.

1. Is either Amber or Violet a sympathetic narrator? Why or why not?

2. On page 280, Amber says, “I couldn’t know for sure if our newest inmate, Orianna Speerling, regretted going outside after her friend that day.” What do you suspect?

3. When Orianna receives the only red cup in the dining hall, her reaction is markedly different than that of her fellow inmates. Why does she respond the way she does? Why do you think she influences the other girls’ feelings about the red cup going forward? How does Ori change the mood of the inmates in general?

4. Three years after Ori’s death, Violet still believes she is the inferior dancer, even though she’s become the star. How do Violet’s insecurity and jealousy shape her character and actions? Why does she remain jealous of Orianna even after Orianna’s death?

5. Violet’s account of the crime changes as she repeats her telling of it. What do you make of the different accounts she gives us over the course of the novel? Similarly, Amber gradually changes some details in the stories she tells us. How do the various versions of events—and their timing—affect your feelings about Violet and Amber? How do they affect your reading experience?

6. Why do you think being in charge of the book cart is so important to Amber?

7. On page 312, when the officers are counting the girls in the dining hall, Amber says, “It seems we are meant to stay at full capacity, which for this facility is forty-two girls.” How does the number forty-two play a role in the novel? Why do you think the author decided it was important to keep the number of inmates at forty-two?

8. How did you interpret the ending? Do you think all readers will reach the same conclusion? Why or why not?