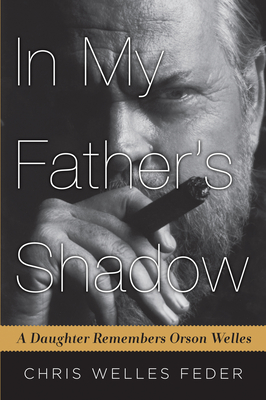 In My Father's Shadow

Out of all the many stars and celebrities Hollywood has produced, only a handful have achieved the fame--and, some would say, infamy--of Orson Welles, the creator and star of what is arguably the greatest American film, Citizen Kane. Many books have been written about him, detailing his achievements as an artist as well his foibles as a human being. None of them, however, has gotten so close to the real man as does Chris Welles Feder's beautifully realized portrait of her father.

In My Father's Shadow is a classic story of a life lived in the public eye, told with affection and the wide-eyed wonder of a daughter who never stopped believing that someday she would truly know and understand her elusive and larger-than-life father. The result is a moving and insightful look at life in the shadow of a legendary figure and an immensely entertaining story of growing up in the unreal reality of Hollywood, enhanced by Welles Feder's collection of many never-before-seen family photographs.

Chris Welles Feder has spent a great part of her life working in the field of education and is known to many as a writer for the children's educational series Brain Quest. She lives with her husband in New York City.
Loading...
or support indie stores by buying on