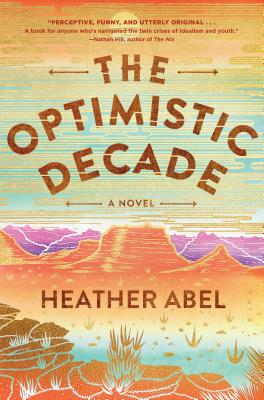 “Bighearted, wise, and beautifully written, this sharply observant exploration of idealism gone awry engages at every level.” —Andrea Barrett, author of The Voyage of the Narwhal and Archangel

Framed by the oil shale bust and the real estate boom, by protests against Reagan and against the Gulf War, The Optimistic Decade takes us into the lives of five unforgettable characters and is a sweeping novel about idealism, love, class, and a piece of land that changes everyone who lives on it.

There is Caleb Silver, the beloved founder of the back-to-the-land camp Llamalo, who is determined to teach others to live simply. There are the ranchers, Don and his son, Donnie, who gave up their land to Caleb and who now want it back. There is Rebecca Silver, determined to become an activist like her father and undone by the spell of both Llamalo and new love; and there is David, a teenager who has turned Llamalo into his personal religion.

Heather Abel’s novel is a brilliant exploration of the bloom and fade of idealism and how it forever changes one’s life.

Heather Abel was raised in Santa Monica, California. She attended Swarthmore College and subsequently worked as a reporter and editor for political newspapers. Her essays have been published in the New York Times, the Los Angeles Times, Slate, and elsewhere. She received her MFA in fiction from the New School, where she later taught creative nonfiction writing. She lives in Northampton, Massachusetts, with her husband and two daughters.
Loading...
or
Not Currently Available for Direct Purchase