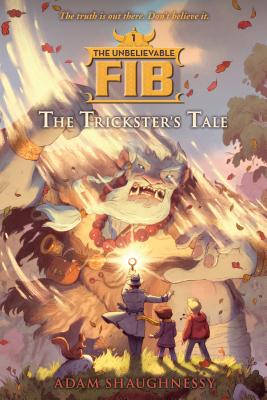 MAGIC is everywhere . . . and the last thing you should do is believe your own eyes.

Dark clouds and ominous thunder have been hanging over Middleton for days. Some say it’s just bad weather, but eleven-year-old Pru will soon learn that it’s much, much more dangerous than that. Mythical beings are invading her usually ordinary town, and it’s up to Pru and newcomer ABE--with help from an uncommonly rude squirrel and the mysterious Mister Fox--to save their home from being destroyed by battling Norse gods.

To do that, they’ll have to outrun trolls and enter worlds of myth and magic. When the pair find themselves locked in a battle against a dangerously clever enemy, they race to find the lost Eye of Odin, source of all knowledge--and the key to stopping a war that could destroy both human and immortal realms.

Originally published as The Entirely True Story of the Unbelievable FIB.

Praise For The Unbelievable FIB 1: The Trickster's Tale…

Adam Shaughnessy is an author and educator. He received his BA in English from Connecticut College and is currently pursuing his MA in children’s literature from Hollins University. Adam lives in Waterford, Connecticut. The Trickster's Tale is the first book in the Unbelievable FIB series.
Loading...
or support indie stores by buying on