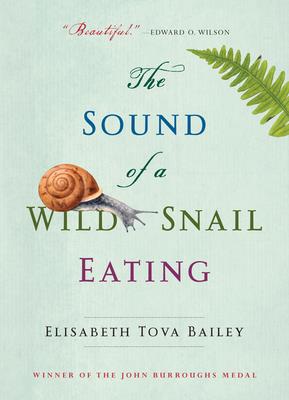 The Sound of a Wild Snail Eating

In a work that beautifully demonstrates the rewards of closely observing nature, Elisabeth Tova Bailey shares an inspiring and intimate story of her encounter with a Neohelix albolabris—a common woodland snail.

While an illness keeps her bedridden, Bailey watches a wild snail that has taken up residence on her nightstand. As a result, she discovers the solace and sense of wonder that this mysterious creature brings and comes to a greater understanding of her own place in the world.

The Sound of a Wild Snail Eating is a remarkable journey of survival and resilience, showing us how a small part of the natural world can illuminate our own human existence, while providing an appreciation of what it means to be fully alive.

WINNER OF THE WILLIAM SAROYAN INTERNATIONAL PRIZE FOR NONFICTION (2012)

WINNER OF THE JOHN BURROUGHS MEDAL (2011)

BOOKS FOR A BETTER LIFE AWARD, FINALIST for Inspirational Memoir

BEST BOOKS OF 2010: MORE OF THE BEST, Library Journal

GREAT TITLES TO ADD TO THE NYT BEST OF 2010, Huffington Post

“Universal, deeply felt, and with an enormously generous soul, the gently told story grants readers a heightened appreciation for the ever-shrinking, ever-fascinating, secretive parts of our unkempt world.” —Alexandra Fuller for The Daily Beast

“How interesting can a snail be? Entirely captivating, as it turns out. [Bailey] is a marvelous writer, and the marriage of science and poetic mysticism that characterizes this small volume is magical.” —Minneapolis Star Tribune

“[Bailey] found comfort in an unlikely companion--a tiny snail, whose micro-doings are the source of a surprising philosophy.” —Entertainment Weekly

“An exquisite meditation on the restorative connection between nature and humans. . . Bailey's slim book is as richly layered as the soil she lays down in the snail's terrarium: loamy, potent, and regenerative.” —The Huffington Post

“Though illness may rob us of vitality, sometimes it can also help bring us understanding---albeit in improbable disguises . . . Perhaps there's something to be said for moving at a snail's pace.” —NPR.org

“This elegant little gem is a triumph.”—Maine Sunday Telegram

1. There are two protagonists in The Sound of a Wild Snail Eating, the snail and the human. Did you find yourself drawn to one more than the other? If so, which one, and why?

2. What did you find most fascinating about the snail?

3. Did the author’s decision not to name the snail impact the narrative? If so, how?

4. How does the author’s awareness of and relationship with the snail develop over the course of the book?

5. How did the snail change the author’s understanding of the natural world as a whole?

6. Whether you are healthy or have an illness, do you ever feel like there is a divide between those two experiences? Do you reach out to friends with health challenges? Do they reach out to you?

7. Have you ever found the natural world to be more comforting than the company of other people? If so, describe such an instance.

8. How does one maintain one’s outlook when illness—or any other type of challenge—results in numerous losses? Consider the ways in which major challenges reshape a life. What gets you through such challenges?

9. The Sound of a Wild Snail Eating is being read by both women and men. Why do you think it crosses the gender gap?

10. Would you recommend this book to friends and, if so, why? Would it be for the natural history of the snail or the narrative about illness and healing? Or for another reason?