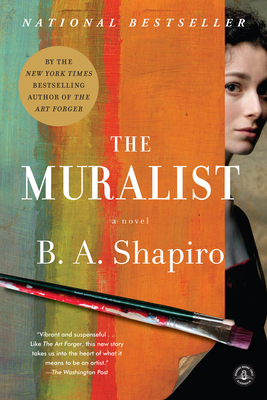 “Vibrant and suspenseful . . . Like The Art Forger, this new story takes us into the heart of what it means to be an artist.” —The Washington Post

“B. A. Shapiro captivated us in 2012 with her ‘addictive’ novel The Art Forger. Now, she’s back with another thrilling tale from the art world.” —Entertainment Weekly

When Alizée Benoit, an American painter working for the Works Progress Administration (WPA), vanishes in New York City in 1940, no one knows what happened to her. Not her Jewish family living in German-occupied France. Not her artistic patron and political compatriot, Eleanor Roosevelt. Not her close-knit group of friends, including Mark Rothko, Jackson Pollock, and Lee Krasner. And, some seventy years later, not her great-niece, Danielle Abrams, who while working at Christie’s auction house uncovers enigmatic paintings hidden behind works by those now-famous Abstract Expressionist artists. Do they hold answers to the questions surrounding her missing aunt?

Praise For The Muralist: A Novel…

B. A. Shapiro is the bestselling author of The Collector's Apprentice, The Muralist, and The Art Forger, which won the New England Book Award for Fiction and the Boston Authors Society Award for Fiction, among other honors. Her books have been selected as community reads in numerous cities and translated throughout the world. Before becoming a novelist, she taught sociology at Tufts University and creative writing at Northeastern University. She and her husband, Dan, divide their time between Boston and Florida.

1. The Muralist exposes many facts about the situation in the United States before World War II, including the denial of visas to qualified refugees, the majority of the country’s opposition to entering the war, and the open discrimination against Jews. Did you find any of this surprising? How has history generally portrayed this prewar period in America?

2. The issue of refugees running from war and oppression is as current today as it was during World War II. What similarities and differences to do you see between nations’ responses today and those before World War II? What about in attitudes among U.S. citizens?

3. The author places Alizée, a fictional character, among the real-life artists who created the Abstract Expressionist movement in New York in the 1940s. How did living there at that time inform their art? Is there something quintessentially American about Abstract Expressionism?

4. Alizée and her friends are employed by the Federal Art Project, a New Deal program funded by the government to give work to artists. Do you think a government program like this could happen in today’s political climate? How are art and artists valued or supported differently in today’s society?

5. Alizée wants to believe that art can change the world. Does art have the power to affect history? Are there examples of its doing so in the past?

6. Alizée decides to be part of an assassination attempt in the hopes of thwarting a greater wrong. Do you agree with what she does? Are there times when such decisions are justifiable? What was her state of mind when she made the decision?

7. How might Alizée’s life have been different if she had lived in the twenty-first century? Would her artistic dreams have been realized? How does Alizée’s artistic life compare with that of her grandniece Danielle?

8. When Danielle finds out the truth about what happened to her aunt, she seems able to become the artist she was meant to be. Why? Which was more important: finding the answer, or asking the question in the first place?

9. Were you surprised at how Alizée’s life turned out? Relieved? How do you think Alizée felt about it? How did her art define her life, even amid drastic change?