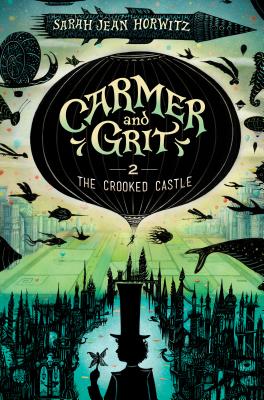 Carmer and Grit investigate a mysteriously magical flying circus in the follow-up to“a fun and frolicking middle grade adventure full of enough fantasy, humor and heart to make giddy even the most finicky reader.” (BookPage)

Shortly after saving the faeries of Skemantis, magician’s apprentice Felix Carmer III and his faerie companion, Grit, head out to see the world. They soon come across a mysteriously magical flying circus. As they get to know the outlandish world of Rinka Tinka’s Roving Wonder Show, it becomes clear there's something not quite normal about this circus or its inventor–and that recent airship disasters plaguing nearby Driftside City may have a sinister explanation.

Fans of the Wildwood trilogy and Lockwood & Co. series will love the thrills and chills of Carmer and Grit, Book 2: The Crooked Castle as it takes readers up in the air with a flying circus, under the sea to the evil Unseelie kingdom, through a terrifying magical snowstorm, and on a chase with the menacing Wild Hunt.

Praise For Carmer and Grit, Book Two: The Crooked Castle…

“Sarah Jean Horwitz ups the quotient of magic, mystery, humor, and heart in this riveting sequel to the well-loved series debut.”
—BookPage

“Even richer in detail and full of undersea and high-flying adventure and danger. Grit and Carmer are recognizable from the previous story, but they continue to grow as they make hard decisions and learn more about the world . . . a well-plotted, magical adventure.”
—School Library Journal

“A rollicking fantasy ride. Grit, Carmer, and Bell are appealing characters who almost meet their match in the evil counterparts here; but, in the end, justice prevails. Fans of The Wingsnatchers will not be disappointed.”
—VOYA Magazine

“I would recommend this book if you like a good mysterious fairytale adventure.”
—KidsBookBuzz.com

Sarah Jean Horowitz was raised in New Jersey, where her love of storytelling grew from listening to her mother's original "fractured fairy tales." She lives in Boston, Massachusetts. The Crooked Castle is the second book in the Carmer and Grit series. Find her on Twitter, @sunshineJHwitz, or at sarahjeanhorowitz.com.
Loading...
or support indie stores by buying on