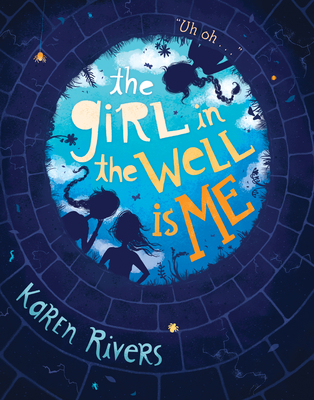 The Girl in the Well Is Me

When you move somewhere new, you get to be someone new. I was ready.

Sixth-grader Kammie Summers’s plan to be one of the popular girls at school hasn’t gone the way she hoped. She’s fallen into a well during a (fake) initiation into the Girls’ club. Now she’s trapped in the dark, counting the hours, hoping to be rescued. (The Girls have gone for help, haven’t they?)

As the hours go by, Kammie’s real-life trouble mixes with memories of the best and worst moments of her life so far, including the awful reasons her family moved to this new town in the first place. And as she begins to feel hungry and thirsty and dizzy, Kammie discovers she does have visitors, including a French-speaking coyote and goats that just might be zombies. But they can’t get her out of the well. (Those Girls are coming back, aren’t they?)

“I dare you to pick up this riveting novel without reading straight through to its heart-stopping conclusion.” —Katherine Applegate, Newbery Medal–winning author of The One and Only Ivan


Praise For The Girl in the Well Is Me…

“Darkly humorous . . . honest and forthcoming . . . [Kammie’s] reflections in the heart of darkness (both literally and figuratively) are where the story hits its stride . . . It’s in the quiet moments when Kammie is along with her thoughts—which become surreal hallucinations—that the book comes alive . . . original and truthful.”—New York Times Book Review

“A brilliantly revealed, sometimes even funny, exploration of courage, the will to live, and the importance of being true to oneself. The catastrophe draws readers in, and the universality of spunky Kammie’s life-affirming journey will engage a wide audience. Moving, suspenseful, and impossible to put down.”—Kirkus Reviews, starred review

“The inimitable voice of 11-year-old Kammie Summers is not one you will soon forget—in turns wise, sad, hopeful, frightened, hilarious. Rivers does a masterful job...”—Buffalo News

“A hypnotic, utterly original novel . . . Guilt and forgiveness, truth and lies, family and self, friendship and social hierarchy--The Girl in the Well Is Me doesn’t so much tackle these subjects as absorb them into its natural fiber. Young readers will take in tough-and-tender Kammie as their own . . . and the suspense and anxiety of her situation will leave every reader breathless until the final page.”—Shelf Awareness

“I dare you to pick up this riveting novel without reading straight through to its heart-stopping conclusion. Karen Rivers has penned a dazzling voice, at once hilarious, heartbreaking, and searingly honest. The Girl in the Well Is Me is a triumph.”—Katherine Applegate, Newbery Medal-winning author of The One and Only Ivan

“A gripping story that doesn’t shy away from the dark places but explores them with heart, humor, and light.”—Kate Messner, author of All The Answers

“The danger will grab readers quickly, and their inevitable investment in Kammie will keep them breathlessly engaged through to the conclusion, perhaps even in one sitting if they can get away with it.”—The Bulletin for the Center of Children’s Books

“This is a fascinatingly well told story that strongly reminded me of Libba Bray’s Going Bovine, but with a completely believable middle grade flavor.”—Teen Librarian Toolbox / School Library Journal

“Superb . . . acrobatic . . . Karen Rivers is able to dive so seamlessly into the darker themes of growing up . . . Because of the tone and persistence of [protagonist] Kammie, the reader never loses faith that, although times may seem impossibly tough, there is always a light at the end of the tunnel.”—Cleaver Magazine

“It should strike a chord with its tween audience.”—Booklist

Karen Rivers’s books have been nominated for a wide range of literary awards and have been published in multiple languages. When she’s not writing, reading, or teaching other people how to write, she can usu­ally be found hiking and taking photos in the forest that flourishes behind her tiny old house in Victoria, British Columbia, where she lives with her two kids, three dogs, and three birds. Find her online at karenrivers.com and on Twitter: @karenrivers.
Loading...
or support indie stores by buying on