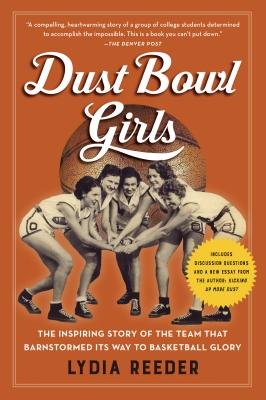 
Praise For Dust Bowl Girls: The Inspiring Story of the Team That Barnstormed Its Way to Basketball Glory…

“Lydia Reeder has crafted a thrilling, cinematic story that seems destined for the big screen (please cast Saoirse Ronan as Doll Harris!). I loved every minute I spent with the bold, daring women of the Cardinals basketball team, whose remarkable journey to victory is the stuff of American legend.”
—Karen Abbott, New York Times bestselling author of Liar, Temptress, Soldier, Spy

Lydia Ellen Reeder is the grandniece of Sam Babb, the extraordinary basketball coach featured in Dust Bowl Girls. She spent over two years conducting research for the book and also wrote and narrated a short film about the Cardinal basketball team, currently on view at the Oklahoma Historical Society website: youtu.be/fokmbnWmp50. As a former associate editor at Whole Life Times in Los Angeles and Delicious Magazine in Boulder, Colorado, Reeder has worked for many years as a copywriter and editor on behalf of corporate and organizational clients and most recently developed e-learning for a national nursing association. She lives in Denver with her husband and enjoys hiking in the mountains of Colorado. Dust Bowl Girls is her first book.

1. Before reading Dust Bowl Girls, did you know that women played highly competitive basketball in the 1930s? What aspects of the game surprised you the most compared to women’s basketball today?

2. Sam Babb had a disability that he had lived with since he was a teenager. How do you think that affected his personality? Do you think it contributed to his becoming a psychology professor or even a basketball coach? Why or why not?

3. After Title IX passed in 1972, women gained equal rights to educational programs, including athletics. How do you think sports, including basketball, have changed for women since 1972? If Title IX had been in existence in 1931, how would the Cardinals’ circumstances have changed?

4. “Covering the court like a red plague, the Oklahoma Presbyterian Cardinals completely annihilated Houston’s home team,” Toka Lee Fields read to her beaming teammates (page 129) from an article that appeared in the Houston Post-Dispatch sports section. Sportswriters seemed to fall in love with the young team. Were you surprised by the level of coverage women’s basketball received? How did the sportswriters depict the women athletes on teams, particularly when it came to femininity? Did Babe Didrikson receive the same type of publicity as the Cardinal players? How was she different?

6. Doll Harris is described as having “Bull-dog tenacity” by her high school coach (page 55). What characteristics made her a good leader and which aspects of her personality do you think caused problems for the Cardinals?

7. Coach Babb had a strict set of rules that the team had to follow during the season. Were Babb’s rules—including a policy against sweets and a 10 p.m. curfew—over the top? How do you think they compare to today’s standards for college athletes?

8. All of the Cardinal players kept scrapbooks full of clipped newspaper articles and keepsakes like ticket stubs, tournament brochures, and personal letters. What role do primary and secondary sources play in telling this story?

9. At the end of Dust Bowl Girls, Sam Babb is being interviewed by the sports editor of the Houston Post-Dispatch, who describes the Cardinals as “pretty and attractive,” adding that “their speed and grace is amazing” (page 255). In turn, Babb describes his players as “just a bunch of country girls who like to play basketball.” Why would Babb downplay the Cardinals’ exceptional athletic abilities and emphasize their ordinariness? Was it strategic? Do you think that’s how he really felt?