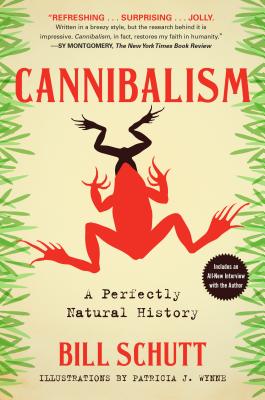 For centuries scientists have written off cannibalism as a bizarre phenomenon with little biological significance. Its presence in nature was dismissed as a desperate response to starvation or other life-threatening circumstances, and few spent time studying it. A taboo subject in our culture, the behavior was portrayed mostly through horror movies or tabloids sensationalizing the crimes of real-life flesh-eaters. But the true nature of cannibalism--the role it plays in evolution as well as human history--is even more intriguing (and more normal) than the misconceptions we’ve come to accept as fact.

In Cannibalism: A Perfectly Natural History,zoologist Bill Schutt sets the record straight, debunking common myths and investigating our new understanding of cannibalism’s role in biology, anthropology, and history in the most fascinating account yet written on this complex topic. Schutt takes readers from Arizona’s Chiricahua Mountains, where he wades through ponds full of tadpoles devouring their siblings, to the Sierra Nevadas, where he joins researchers who are shedding new light on what happened to the Donner Party--the most infamous episode of cannibalism in American history. He even meets with an expert on the preparation and consumption of human placenta (and, yes, it goes well with Chianti).

Bringing together the latest cutting-edge science, Schutt answers questions such as why some amphibians consume their mother’s skin; why certain insects bite the heads off their partners after sex; why, up until the end of the twentieth century, Europeans regularly ate human body parts as medical curatives; and how cannibalism might be linked to the extinction of the Neanderthals. He takes us into the future as well, investigating whether, as climate change causes famine, disease, and overcrowding, we may see more outbreaks of cannibalism in many more species--including our own.

Cannibalism places a perfectly natural occurrence into a vital new context and invites us to explore why it both enthralls and repels us.

“Refreshing…A jolly book, written in a breezy style, but the research behind it is impressive.”
—Sy Montgomery (The Soul of an Octopus) for the New York Times Book Review

“[A] deeply researched account. The book is full of wondrous details . . . but its most valuable contribution is in challenging ingrained attitudes.”
—The New Yorker

“In this comprehensive account of a taboo practice, Schutt (Dark Banquet), professor of biology at LIU-Post, finds that cannibalism is more widespread than generally believed and proffers insight as to why different species resort to the practice of cannibalism, with plenty of scientific evidence to support his conclusions….With plenty of examples of cannibalism in humans past and present, Schutt’s well researched and suspenseful work is a must read for anyone who’s interested in the topic—and can stomach the gore.”
—Publishers Weekly, starred review

“A delightful mixture of humor and scholarship. Erudite, amusing and often moving, this is a compelling examination of a serious topic.”
—BookPage

“Cannibalism has seemingly always held a place of the utmost abhorrence in human society. But why, asks Schutt, when cannibalism is such a normal part of nature as a whole? In a witty, often funny, and thoroughly fascinating study, Schutt delves into cannibalism as an everyday occurrence throughout the animal kingdom….VERDICT Schutt’s writing is delightfully accessible…and utterly captivating.”
—School Library Journal, starred review

“A learned, accessible, and engaging approach to a meaty and always-controversial subject.”
—Kirkus Reviews

“The perfect literary entrée for those willing to contemplate mummy umami or Tex-Mex placenta while touring the history of animals and people eating their own kind.”
—Scientific American

“Schutt mixes science and history with equal deftness, never indulging in gore for the sake of shock value. His scholarly approach, bolstered by his own investigations and interviews…all make for an endlessly fascinating read.”
—Seattle Book Review

“Bill Schutt serves up a deliciously entertaining smorgasbord of scientific reality. He gives us a deeper insight into the way nature really works.”
—Darrin Lunde, Museum Specialist, Smithsonian Institution, and author of The Naturalist.

“Butterflies do it. So do some toads, birds, and polar bears. Did dinosaurs do it? What about the Neanderthals? And what about us, for that matter? If you're hungry for a fun, absorbing read about which animals eat their own kind and why, read this book.”
—Virginia Morell, New York Times bestselling author of Animal Wise: How We Know Animals Think and Feel

“A clear-headed, sometimes humorous, sometimes tragic—and always fascinating—compendium of one of Western culture’s strongest taboos. From the Australian redback spider to the Donner Party, Schutt examines the evolutionary purposes that eating one’s own can serve. But he goes beyond scientific explanation to show how deeply cannibalism is woven into our own history and literature.”
—Cat Warren, New York Times bestselling author of What the Dog Knows: Scent, Science, and the Amazing Ways Dogs Perceive the World

"A masterful and compulsively readable book that challenges our preconceived notions about a behavior often sensationalized in our culture -- and frequently misunderstood in the scientific world.”
—Ian Tattersall, author of The Rickety Cossack and Other Cautionary Tales from Human Evolution

“A fun, entertaining read, and Bill Schutt’s insatiable curiosity for his subject is infectious. If you’re a fan of Mary Roach, you’ll definitely want to check this out.”
—Gina Nicoll, Book Riot

“This wonderful book will speak to the science-minded, to folks who like history, or to anyone who’s crazy-curious about taboo subjects like this.”
—Terri Schlichenmeyer, The Bookworm Sez

“Drawing from an impressively broad span of history and zoology, and with a good dose of humour, Bill Schutt offers a fascinating and not-too-gruesome exploration of cannibalism as it appears in both human society and the animal kingdom…. Delightfully engaging and entertaining.”
—Winnipeg Free Press

“A well-organized, thorough, and highly readable study of a phenomenon few of us pause to think about. This is a book you can sink your teeth into.”
—The East Hampton Star

Bill Schutt is a professor of biology at LIU Post and a research associate in residence at the American Museum of Natural History. His first book, Dark Banquet: Blood and the Curious Lives of Blood-Feeding Creatures, was selected as a Best Book of 2008 by Library Journal and Amazon and was chosen for the Barnes & Noble Discover Great New Writers program. Born in New York City and raised on Long Island by parents who encouraged his love for turning over stones and peering under logs, Schutt quickly grew a passion for the natural world, with its enormous wonders and its increasing vulnerability. He received his PhD in zoology from Cornell and has published over two dozen peer-reviewed articles on topics ranging from terrestrial locomotion in vampire bats to the precarious, arboreal copulatory behavior of a marsupial mouse. His research has been featured in Natural History magazine as well as the New York Times, Newsday, the Economist, and Discover magazine. He was recently reelected to the board of directors of the North American Society for Bat Research. Schutt lives on the East End of Long Island with his wife and son.

This author is represented by the Hachette Speakers Bureau.