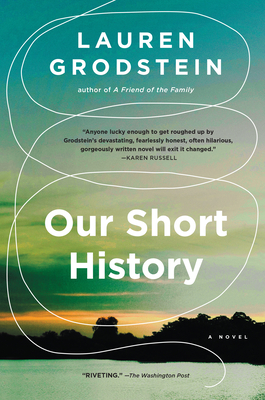 Praise For Our Short History: A Novel…

“In Our Short History, Lauren Grodstein breaks your heart, then miraculously pieces it back together so it’s bigger—and stronger—than before. This novel will leave you appreciating both the messiness of life and the immense depths of love.”
—Celeste Ng, author of Everything I Never Told You

“One of the best books of 2017 . . . Grodstein has not just written another beautiful book, but one with deep purpose and meaning.”
—Roar

“Funny and fast-paced and extraordinarily insightful on every page. . . . Anyone lucky enough to get roughed-up by Grodstein's devastating, fearlessly honest, often hilarious, gorgeously written novel will exit it changed.”
—Karen Russell, author of Vampires in the Lemon Grove

“Karen is a character many will love—determined, flawed, loving, witty. . . . a poignant and realistic portrait.”
—Kirkus Reviews

“A meditation on love and grief . . . Lauded novelist Lauren Grodstein plunges into both beautiful and ugly emotions without hesitation.”
—Bookpage