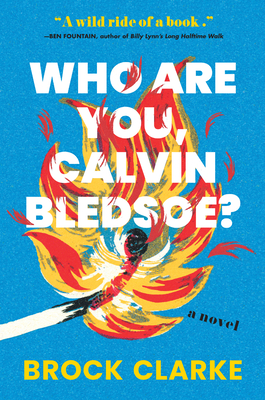 Who Are You, Calvin Bledsoe?

“A story in which anything and everything can happen, and mostly does. This is a book of many trips—across oceans, back to the past, and, most profoundly, into the infinite deep space of the human heart. Brock Clarke has given us a wonderful novel that bursts with all the meaty stuff of real life.” —Ben Fountain, author of Billy Lynn’s Long Halftime Walk

Calvin Bledsoe’s journey begins with the death of his mother. An internationally known theologian and an expert on all things John Calvin, she had been the dominant force in her son’s existence, so much so that he never left home—even when he married—and, as a result, never grew up.

At his mother’s funeral, Calvin is introduced to his aunt Beatrice, a woman he had not even known existed. Beatrice immediately makes it clear to Calvin that she is now in charge of his life, and the first thing she is going to do is whisk him off to Europe with her for a grand adventure.

As Calvin and his aunt traverse the continent, it becomes apparent that her clandestine behavior is leading him into danger. Facing a menagerie of antiquities thieves, secret agents, religious fanatics, and an ex-wife who is stalking him, Calvin begins to suspect there might be some meaning behind the madness. Maybe he’s not the person he thought he was? Perhaps no one is ever who they appear to be? But there’s little time for soul-searching, as Calvin first has to figure out why he has been kidnapped, why his aunt has disappeared, and who the hell burned down his house in Maine.

Powered by pitch-perfect dialogue, lovable characters, and surprising optimism, Who Are You, Calvin Bledsoe? is a modern-day take on Graham Greene’s classic Travels with My Aunt, a novel about grabbing life, and holding on—wherever it may take you.

Brock Clarke is an award-winning author of seven previous works of fiction, including the bestselling An Arsonist's Guide to Writers' Homes in New England. He lives in Maine, and teaches at Bowdoin College.
Loading...
or
Not Currently Available for Direct Purchase