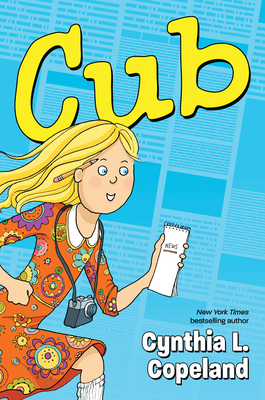 “Raina Telgemeier fans will lap this up.”
— Bulletin of the Center for Children's Books

“In both its story and its buoyant artwork—the groovy coloring was done by Ronda Pattinson—Copeland gets so many things right. She gets the nuances of hippie-chic ‘70s teenage fashion. She gets the daffy chatter of cousins after Thanksgiving dinner has been eaten. ('Eat it! Eat the weird pie!') She gets the ordinary heartbreak when, again and again, Cindy’s father reflexively nourishes the ambitions of her brothers, looking past her as if she is invisible. ('You know, John, I think you’d be an excellent politician!' ) And she gets the way that Cindy’s immediate problems, like a friend scorning her in the hall, can feel as vivid and epoch-defining as Watergate or the passage of the Equal Rights Amendment . . . Cub offers a road map for the . . . Cindys of today, proposing to the awkward and the ambitious that they are not, in fact, hostage to the merciless social sorting that can happen within the confines of middle school . . . Look outward, this delightful book advises. A great big world is waiting.”
—The New York Times Book Review