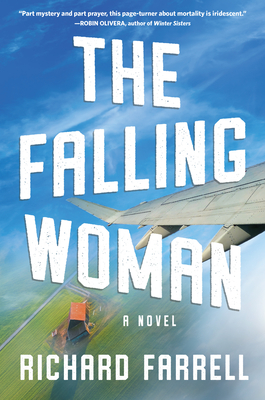 First, it’s just a barely believable rumor: one person may have survived the midair explosion of a passenger jet on a cross-country course from Washington, D.C., to San Francisco. But soon she becomes a national media sensation when “the Falling Woman,” as the press dubs her, is said to have been taken to a Wichita hospital—and then to have disappeared without a trace.

As a dedicated National Transportation Safety Bureau agent joins the search for clues, he becomes drawn into the woman’s moving and personal fight to keep secret the story of her survival, even from her own family, and possibly at risk to his own career.

Richard Farrell is a graduate of the U.S. Naval Academy and a former pilot who holds an MFA in writing from Vermont College of Fine Arts. His work has appeared in Hunger Mountain, upstreet, New Plains Review, Potomac Review, Descant, and elsewhere. Originally from Worcester, Massachusetts, he teaches creative writing at Grossmont College in San Diego, where he lives with his wife and two children. This is his first novel.

1. The Falling Woman explores themes of uncertainty, identity, and self-determination. Give an example of how each of these themes are used in the story.

2. At the outset of the novel, Charlie Radford is portrayed as an ambitious young investigator motivated by career aspirations and hopes for advancement. Yet the choices he makes run counter to these aspirations. How do you think you would have handled the challenges he faced in dealing with the falling woman? Do you think you could or would have made the same decisions he did?

3. Commercial plane crashes are relatively rare occurrences, yet there seems to be an acute fascination with them. Why do you think this is so? How do you feel about flying?

4. Radford’s choice of career seems to have been motivated by his disappointment in not succeeding as a pilot himself. Do you think of failure and disappointment as motivators in most people’s lives? Give some examples of others—real or fictional—who have achieved success after struggling with failure.

5. How do you think Erin Geraghty’s life would have played out if her plane had not crashed? Do you think the life she will have because of her decision to remain anonymous will be very different, or better? How?

6. What do you think Erin’s final days will be like? Do you think she will stick to her decision not to reach out to her family?

7. Though the possibility of surviving the crash of an airplane that disintegrates in midair seems extremely unlikely, there are a number of actual cases in which people did survive a long fall. Did you find Erin’s survival to be convincing? Would you agree with the priest Radford encountered at the hospital that her survival was a “miracle”? Or do you view it as a matter of random possibility?

8. If you had been in Erin’s situation—caught in a loveless marriage, diagnosed with a form of cancer that’s almost always fatal—do you think you would have made the same decision she does? If so, why?

9. Do you view Erin’s decision to not rejoin her family to be one of strength or cowardice? How so?

10. Given the way both traditional and social media seem to know about or learn of virtually everything of note that happens, do you think Erin’s decision to disappear was rational and realistic, or perhaps more a result of the mental trauma she experienced in the accident? Why?