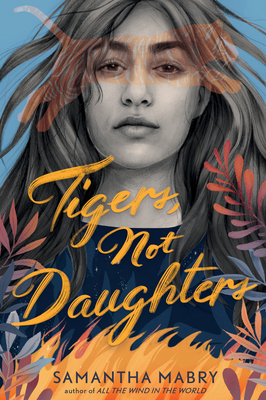 “Haunting and magical, Tigers, Not Daughters follows the lives of three young women one year after the death of their eldest sister, Ana — and it seems her presence still lingers. There’s Iridian, the writer; Rosa, the quiet observer; and Jessica, who strives to become the embodiment of who Ana once was. Now Ana leaves ominous signs and messages for her sisters, but whether she’s warning them or antagonizing them, none can say. Mabry’s writing is so lyrical and enrapturing, I would have been happy to follow the Torres girls wherever their intuitive hearts took them long after the last page.”
— Andrew King, University Book Store, Seattle, WA
View the List

“Move over, Louisa May Alcott! Samantha Mabry has written her very own magical Little Women for our times.” —Julia Alvarez, author of How the García Girls Lost Their Accents

In a stunning follow-up to her National Book Award-longlisted novel All the Wind in the World, Samantha Mabry weaves an aching, magical novel that is one part family drama, one part ghost story, and one part love story.

The Torres sisters dream of escape. Escape from their needy and despotic widowed father, and from their San Antonio neighborhood, full of old San Antonio families and all the traditions and expectations that go along with them. In the summer after her senior year of high school, Ana, the oldest sister, falls to her death from her bedroom window. A year later, her three younger sisters, Jessica, Iridian, and Rosa, are still consumed by grief and haunted by their sister’s memory. Their dream of leaving Southtown now seems out of reach. But then strange things start happening around the house: mysterious laughter, mysterious shadows, mysterious writing on the walls. The sisters begin to wonder if Ana really is haunting them, trying to send them a message—and what exactly she’s trying to say.

In a stunning follow-up to her National Book Award–longlisted novel All the Wind in the World, Samantha Mabry weaves an aching, magical novel that is one part family drama, one part ghost story, and one part love story.

Samantha Mabry credits her tendency toward magical thinking to her Grandmother Garcia, who would wash money in the kitchen sink to rinse off any bad spirits. She teaches writing and Latino literature at a community college in Dallas, where she lives with her husband, a historian, and a cat named Mouse. She is the author of A Fierce and Subtle Poison and All the Wind in the World. Visit her online at samanthamabry.com or on Twitter: @samanthamabry.

Praise For Tigers, Not Daughters…

"Like Mabry's previous books, I found that Tigers, Not Daughters is all about the atmosphere and feelings. The small town where the Torres sisters dwell feels so real . . . Mabry's language and tone are both lush and poetic, but that doesn't stop these tiger girls from having teeth.”
—NPR

"One of the most crucial voices in young adult literature."
—Bustle

"Samantha Mabry gives us paranormal magical realism at its best with her latest YA novel."
—Ms.

“Mabry speaks gracefully to the transformative power of grief and the often messy (even violent) road to letting go.”
—Publishers Weekly, starred review

“Little Women meets The Virgin Suicides with a magical realist twist in this evocative and lovely novel . . . An engaging, heartfelt exploration of the multifaceted inner lives of teen girls and sisterhood.”
—School Library Journal, starred review

"Borrowing elements of magical realism and Latinx folklore, this is a story that is often uncomfortable; in its quest to explore grief, family, and the traumas inflicted by each, it lays its characters utterly and unforgettably bare.”
—Booklist, starred review

"This is quietly searing tale of sisterly love and family secrets, of a grief so big it swallows its mourners up, blotting out the future and distorting the past . . . an appealingly unsettling infusion of ambiguous faith and unexplained miracles.”
—BCCB, starred review

"The kind of story that digs its claws deep into you. Though just under 300 pages, Mabry crafts a profoundly character driven plot that explores grief, depression, and sisterhood . . . A powerful story, filled with impactful characters and realistic depictions of grief and depression. Paired with its eerie paranormal elements, Tigers, Not Daughters will haunt your thoughts long after you’ve finished reading.”
—The Nerd Daily

“This fierce, unforgettable whirlwind of a novel, a wondrous mix of ghost story and drama of sisterly rebellion, holds the reader in thrall from the first sentence to the final page.”
—The Buffalo News

“Samantha Mabry blends elements of magical realism, moments of connection and grief, and genuinely eerie scares to create a story exploring the ‘magic in small things,’ as well as a timely ode to sisterhood and feminism.”
—The Washington Independent Review of Books

“Move over, Louisa May Alcott! Samantha Mabry has written her very own magical Little Women for our times. This is no family of tamed girls but a clan of fierce and fighting young women who will draw readers into their spell. A celebration of the bonds of sisterhood and of the ways we heal by reaching beyond our losses, our brokenness and fears to the love that holds and heals.”
—Julia Alvarez, author of How the García Girls Lost Their Accents

“A moody and unflinching examination of the gritty, tender and impossible parts of people that make them unforgettably whole. You don't read Samantha Mabry’s books so much as experience them. Ferocious and gorgeously crafted. I loved it.”
—Courtney Summers, New York Times bestselling author of Sadie

"Mabry is one of our of city’s finest writers.”
—D Magazine