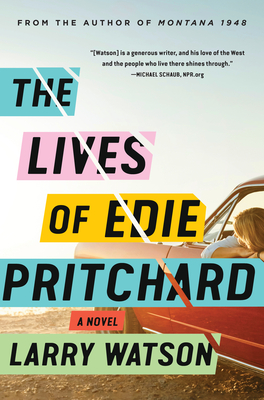 By the Bestselling Author of Let Him Go

A Most Anticipated Book of the Summer: The Millions * Library Journal * Parade

"Characters so real they could walk off the page, virtuoso writing and up-all-night drama."

Edie—smart, self‑assured, beautiful—always worked hard. She worked as a teller at a bank, she worked to save her first marriage, and later, she worked to raise her daughter even as her second marriage came apart. Really, Edie just wanted a good life, but everywhere she turned, her looks defined her. Two brothers fought over her. Her second husband became unreasonably possessive and jealous. Her daughter resented her. And now, as a grandmother, Edie finds herself harassed by a younger man. It’s been a lifetime of proving that she is allowed to exist in her own sphere. The Lives of Edie Pritchard tells the story of one woman just trying to be herself, even as multiple men attempt to categorize and own her.

Triumphant, engaging, and perceptive, Watson’s novel examines a woman both aware of her physical power and constrained by it, and how perceptions of someone in a small town can shape her life through the decades.


Praise For The Lives of Edie Pritchard…


“Set in Montana, and evoking Annie Proulx, The Lives of Edie Pritchard is a testament by one of our greatest ‘regional’ novelists to the power of stories.”
—The Millions

1. In The Art of Fiction, John Gardner wrote, “In nearly all . . . fiction, the basic—all but inescapable—plot form is: A central character wants something, goes after it despite opposition (perhaps including his [sic] own doubts), and so arrives at a win, lose, or draw.” What does Edie want, and what stands in the way of her getting what she wants? Does she win, lose, or come to a draw?

2. There are actual twins in The Lives of Edie Pritchard, but throughout the narrative there are elements—characters, episodes, incidents—that parallel others. What are some of those examples of “twinning” in the novel? What are the effects of those similarities?

3. Important conversations and significant moments in the novel often occur in automobiles. What do you make of that?

4. How does Edie change over the years? How does she remain unchanged?

5. Roy Linderman figures importantly in all three parts of the novel. How does he change over the years? How does he remain unchanged?

6. Mother and daughter relationships loom large in the novel. How do they add to our understanding of Edie and her world?

7. Gladstone, Montana, is the setting for important action in all three sections. It’s Edie’s hometown, and though she doesn’t seem nostalgic or overly fond of it, she keeps going back. Why? What keeps bringing her back and what finally keeps her there?

8. So much of the novel is dialogue and action. What are some effects of the story being told through those narrative modes?

1o. After Edie leaves Gladstone in 1968, Roy Linderman is largely absent from her life. Yet he’s present at crucial moments in later years. How would you characterize the relationship between them? Does it change over time?

11. On more than one occasion Roy Linderman asks Edie to go away with him. Why is “going away” so important to his proposal?

13. There are many minor characters in the novel—Mildred Linderman, Gary Dunn, Rita Real Bird, George Real Bird, Lauren Keller, to name just a few. What importance do these characters have to the overall narrative?

14. Did you return to your hometown and if not, why not?

15. Did you hope that Edie and Roy would eventually end up together? Why didn’t it happen?