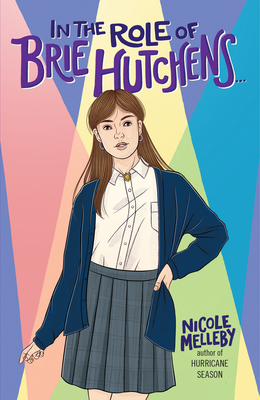 In the Role of Brie Hutchens... (Hardcover)

Introducing Brie Hutchens: soap opera super fan, aspiring actor, and so-so student at her small Catholic school. Brie has big plans for eighth grade. She’s going to be the star of the school play and convince her parents to let her go to the performing arts high school. But when Brie’s mom walks in on her accidentally looking at some possibly inappropriate photos of her favorite actress, Brie panics and blurts out that she’s been chosen to crown the Mary statue during her school’s May Crowning ceremony. Brie’s mom is distracted with pride—but Brie’s in big trouble: she has not been chosen. No one has, yet. Worse, Brie has almost no chance to get the job, which always goes to a top student.

Desperate to make her lie become truth, Brie turns to Kennedy, the girl everyone expects to crown Mary. But sometimes just looking at Kennedy gives Brie butterflies. Juggling her confusing feelings with the rapidly approaching May Crowning, not to mention her hilarious non-star turn in the school play, Brie navigates truth and lies, expectations and identity, and how to—finally—make her mother really see her as she is.

Nicole Melleby is a born-and-bred Jersey girl with a passion for storytelling. She studied creative writing at Fairleigh Dickinson University and currently teaches creative writing and literature courses with a handful of local universities. When she’s not writing, she can be found browsing the shelves at her local comic shop or watching soap operas with a cup of tea.

Praise For In the Role of Brie Hutchens...…

"Melleby paints Brie as a recognizable teen: authentic in her self-centeredness and sympathetic in her attempts to embrace her identity. Brie’s anxiety over her faith, as well as how to come out to her loved ones, is wrenching and genuine in this accomplished, leisurely paced read."
—Publishers Weekly, starred review

“A nuanced exploration of how to reconcile faith and identity. Melleby's clear, honest voice expertly captures the frustration, awkwardness, and fear of being vulnerable—as well as the potential rewards. This funny, tender, and heart-wrenching story will have readers calling for an encore.”
—Kirkus Reviews, starred review

“The story honestly conveys Brie's confusion about her sexuality, while at the same time, moves plotlines to the next level by also delving into the way the family's Catholicism affects events. Younger teens questioning their sexuality—or faith—will find much to ponder here.”
—Booklist

“Chapter openings describing events from soap operas—the one strong interest she shares with her mom—underscore how dramatic the events feel to Brie, as well as the fact that, though she’s realized something new about herself, she’s still the same person.”
—The Horn Book

"Her struggles and those of her family seem authentic, their interactions realistic, and Brie’s desire to be really seen and loved for who she is will ring true with many middle school readers."
—School Library Journal