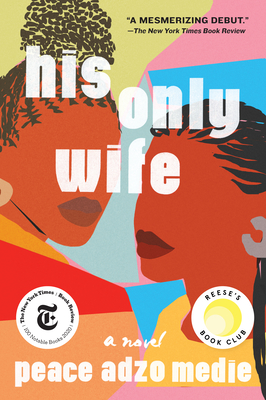 “A story that kept me tied to the page, told in masterful, seamless prose.”
—BuzzFeed

“I love this book so much I turned the pages so fast . . . It’s all about the search for independence and being true to yourself and who you really are.”
—Reese Witherspoon


Praise For His Only Wife…


“Peace Adzo Medie’s mesmerizing debut novel lives up to both the power of its first sentence and the promise of its author’s first name . . .  At a time when adventure is scarce, Medie gives you a lot to look forward to, think about and be grateful for.”
—The New York Times Book Review

"With spot-on characterizations of deeply involved extended families and realistic depictions of how money can change everything, Peace Adzo Medie conjures a Cinderella story just right for 2020.”
—Time

Peace Adzo Medie's debut novel, His Only Wife, was a New York Times Book Review Editors’ Choice, a New York Times Notable Book of 2020, a Time magazine Must-Read Book of 2020, and a Reese’s Book Club pick. Her book Global Norms and Local Action: The Campaigns to End Violence against Women in Africa was published by Oxford University Press in 2020. She has won numerous awards for her scholarship and has held several fellowships, including the Oxford-Princeton Global Leaders Fellowship. She holds a PhD in public and international affairs from the University of Pittsburgh and a BA in geography from the University of Ghana.