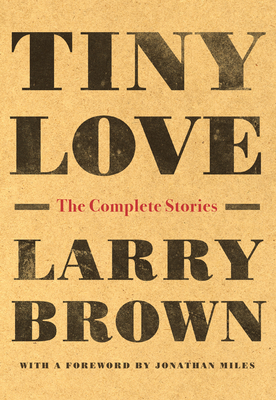 "Larry Brown wrote the way the best singers sing: with honesty, grit, and the kind of raw emotion that stabs you right in the heart. He was a singular American treasure." —Tim McGraw

A career-spanning collection, Tiny Love brings together for the first time the stories of Larry Brown’s previous collections along with those never before gathered. The self-taught Brown has long had a cult following, and this collection comes with an intimate and heartfelt appreciation by novelist Jonathan Miles. We see Brown's early forays into genre fiction and the horror story, then develop his fictional gaze closer to home, on the people and landscapes of Lafayette County, Mississippi. And what’s astonishing here is the odyssey these stories chart: Brown’s self-education as a writer and the incredible artistic journey he navigated from “Plant Growin’ Problems” to “A Roadside Resurrection.” This is the whole of Larry Brown, the arc laid bare, both an amazing story collection and the fullest portrait we’ll see of one of the South’s most singular artists.

“Drawn in gritty, deceptively simple prose, his characters drink too much, smoke too much, and flout the law when they can. But Brown proves that the coarsest material can produce the most affecting art.”
—Men’s Journal

“The complete collection of Brown’s darkly comic short stories starring smart and salty workaday Southerners . . . Now counted among the titans of modern Southern storytellers, Brown lived a life that proclaimed the power of writing your own dream.”
—Garden & Gun

“This collection showcases the depth of Brown’s work and his evolution as a Mississippi artist and writer.”
—Deep South Magazine

“There is a stark, stripped-down quality to Brown’s writing. His language is blunt and sometimes coarse. It is the pitch-perfect voice for telling the indelible stories of these working-class men and women who strive to do right but who often prove to be their own worst enemies.”
—Atlanta Journal Constitution​

“A thorough testament to his loving eye for rural minutiae. The details in each story . . . could only be the work of someone who’d shared an Old Milwaukee or two with his characters . . . Tiny Love showcases Brown’s singular, unconditional empathy for the drunk and neglectful, the depraved but helpless, the ornery yet resigned—all the dogs that don’t make it across the highway.”
—INDY Week

“Threads of humor and grace run through the tales of violence, infidelities, and alcoholism, masterfully introducing an unexpected compassion. Brown excels at capturing psychological complexity with spare, humane prose in an original voice that was sadly lost to us far too soon.”
—Booklist

“[An] outstanding, capacious volume . . . Whether exploring the underbelly of love or the despair of editorial rejection, Brown’s stories drip with often uncomfortable detail as he describes the crass, the ugly, and the broken in ways unique and captivating.”
—Publishers Weekly

“A career-spanning collection by a master of American realism . . . Compassionate and gritty and lyrical—a master class.”
—Kirkus Reviews

“When I discovered Big Bad Love, I went back and read everything. That man could write. He moved through life with a discerning eye and a capacity for language that I wanted. How did he do that? Story makes sense of what cannot make sense just by showing you the broken tragic heart that goes on beating. Which he did so beautifully. And with a sense of humor, Lord save us . . . I could read Larry Brown anytime, even though I know what’s coming, even though I know he’s going to break my heart again.”
—Dorothy Allison, author of Bastard Out of Carolina

“Larry Brown wrote stories that captured both the beauty and the brokenness of life. He never blinked at life’s darkness, but drew you into it with his characters. Larry Brown wrote the way the best singers sing: with honesty, grit, and the kind of raw emotion that stabs you right in the heart. He was a singular American treasure.”
—Tim McGraw

Jonathan Miles is the author of the novels Dear American Airlines, Want Not, and Anatomy of a Miracle. He is a former columnist for the New York Times and has served as a contributing editor to a wide range of national magazines. His journalism has been included numerous times in the annual Best American Sports Writing and Best American Crime writing anthologies. A former longtime resident of Oxford, Mississippi, he currently lives along the Delaware River in rural New Jersey.
Loading...
or support indie stores by buying on