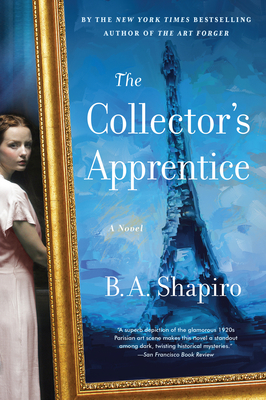 "A clever and complex tale of art fraud, theft, scandal, murder, and revenge.” —Publishers WeeklyIn this surprising, noirish page-turner, B. A. Shapiro once again takes readers into the world of art, glamour, and mystery. Accused of helping her fiancé steal her family’s fortune and her father’s art collection, Paulien Mertens has fled to France. To protect herself from the law and the wrath of those who lost everything, she has created a new identity. Paulien, aka Vivienne, takes a position working for an American art collector modeled after real-life eccentric museum founder Albert Barnes and quickly becomes caught up in the 1920s Paris of artists and expats, including post-Impressionist painter Henri Matisse and writer Gertrude Stein. From there, she sets out to recover her father’s art collection, prove her innocence, and exact revenge on her ex-fiancé. B. A. Shapiro has made the historical art thriller her own, and once again she gives us an unforgettable tale about what we see—and what we refuse to see.

Praise For The Collector's Apprentice: A Novel…

B. A. Shapiro is the author of the award-winning New York Times bestseller The Art Forger and the bestselling The Muralist. She has taught sociology at Tufts University and creative writing at Northeastern University and lives in Boston with her husband, Dan, and their dog, Sagan. Her website is bashapirobooks.com.

1. One of the themes of the book is that we see only what we want to see, and that we’re easily swayed by outward appearances. Do you think this is true? How does Shapiro develop this theme throughout the novel? Have you had any experiences in which you were fooled by someone pretending to be someone or something they weren’t?

2. The majority of The Collector’s Apprentice takes place in the 1920s and is told from Vivienne’s point of view. However, there are also portions narrated by Paulien that take place before the main storyline, and portions narrated by an older Vivienne that take place after the main storyline. How did this structure affect your reading experience?

3. There are also intermittent chapters from George’s point of view. How different would the story have been without the antagonist’s take? What do we learn about Vivienne/Paulien from seeing her through George’s eyes?

5. As in many of her books, in The Collector’s Apprentice, Shapiro explores the question of what her characters are willing to do to get what they want. Does Paulien cross an ethical line to get what she wants? Does Vivienne? George? Edwin? Do you think any of their morally ambiguous decisions are justified?

6. Another question that arises from the story is: Who owns art? If you purchase a piece of art, does it belong to you forever, and are you free to destroy it or keep other people from enjoying it? Can anyone “own” great art, or is there a cultural obligation to share it with the world? Was Bradley right to control who could see his artwork? Was his real-life counterpart, Albert Barnes?

7. Do you think that either Paulien or George would be able to successfully accomplish their disguises and changes of identity today? Would the internet and social media make it more or less difficult?

8. Do you believe Paulien was in any way responsible for what George did to her family? Why or why not?

9. There are a number of love stories in The Collector’s Apprentice. Do you believe that any of these relationships were “true love”? Did Paulien love George? Did Vivienne? Did Bradley love Vivienne? Did Vivienne love Matisse and did he love her? Did George love either Paulien or Vivienne? Is a man like George capable of love?

10. Shapiro based George on her study of sociopaths, imbuing him with many of the characteristics of this kind of personality disorder, particularly his lack of empathy. Does his inability to put himself in someone else’s shoes hurt him or help him? Have you ever encountered anyone with these traits in your own life?

11. In The Collector’s Apprentice, Shapiro imagines interactions between persons who actually existed and characters she has created. Does this enhance or detract from the believability of the story?

12. Shapiro included an author’s note that explains some of the discrepancies between the story and historical events. Was this helpful? What are some of the questions you would ask her if you could?