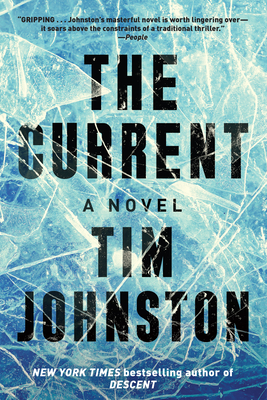 “Tim Johnston’s brand of storytelling is a curious hybrid of conventional crime fiction and observation of human nature that demands attention. In The Current, Johnston goes beyond the sensational and asks relevant questions when tragedy strikes, addressing real topics that come with the loss of a loved one and the questions that follow a horrific crime. As with Johnston’s previous novel, Descent, his latest concludes with a wallop you will not see coming.”
— Javier Ramirez, The Book Table, Oak Park, IL
View the List

“Atmospheric in every way, from the frigid weather to the tension to the memories and sensations of being underwater. The Black Root River that runs near a small Minnesota town has taken the lives of several girls, and it might as well have taken the life of the man accused of causing one of the deaths. The way a crack in the ice can lead to drowning, secrets spoken out loud can change everything.”
— Eileen McGervey, One More Page Books, Arlington, VA
View the List

"A first-rate thriller . . . Past and present merge in The Current, Tim Johnston's atmospheric, exquisitely suspenseful novel of two murders separated by ten years."
—The Washington Post

“Gripping . . . Johnston’s masterful novel is worth lingering over—it soars above the constraints of a traditional thriller and pulls you deep into the secrets of a grief-stricken town.”
—People

Tim Johnston, whose breakout debut Descent was called “astonishing,” “dazzling,” and “unforgettable” by critics, returns with The Current, a tour de force about the indelible impact of a crime on the lives of innocent people.


In the dead of winter, outside a small Minnesota town, state troopers pull two young women and their car from the icy Black Root River. One is found downriver, drowned, while the other is found at the scene—half frozen but alive.

What happened was no accident, and news of the crime awakens the community’s memories of another young woman who lost her life in the same river ten years earlier, and whose killer may still live among them.

Determined to find answers, the surviving young woman soon realizes that she’s connected to the earlier unsolved case by more than just a river, and the deeper she plunges into her own investigation, the closer she comes to dangerous truths, and to the violence that simmers just below the surface of her hometown.

Grief, suspicion, the innocent and the guilty—all stir to life in this cold northern town where a young woman can come home, but still not be safe. Brilliantly plotted and unrelentingly propulsive, The Current is a beautifully realized story about the fragility of life, the power of the past, and the need, always, to fight back.


Praise For The Current: A Novel…

“Johnston dazzled with his breakout thriller, Descent; his follow-up is a more ambitious page-turner, unpacking how a shocking murder impacts the denizens of a small Minnesota town as they weather suspicion, guilt, and grief.”
—Entertainment Weekly (The 50 Most Anticipated Books of 2019)

“Tim Johnston has given us the gold standard of lush narrative description—captivating, mesmerizing, stunning. It's doubtful you'll ever read a more beautifully written book than The Current.”
—The New York Journal of Books

“The Current is a haunting story . . . Johnston masterfully describes people, their grief, their guilt, and loneliness. He brings out both the brutal and loving sides of human nature. It is a real treat for those who love thrillers.”
—The Washington Book Review

“Tim Johnston’s second novel, The Current, is even better than his first, which is saying something. He’s a terrific writer and definitely a name to watch.”
—Dennis Lehane, author of Since We Fell

“Tim Johnston’s gripping second novel is much more than a skillfully constructed, beautifully written whodunit. It’s a subtle and lyrical acclamation of the heart and spirit of small-town America. The Current is not your conventional, frenetically paced page-turner, although it smolders with a brooding, slow-burn tension that nudges the reader forward, catching you up in the lives of the troubled solitaries at the book’s core.”
—Washington Independent Review of Books

“Pick up Tim Johnston's suspenseful novel The Current and you risk finding yourself glued to your chair, eyes to the pages, no thought of attending to daily obligations. Johnston's elegant, cinematic style takes us into the characters' lives and history, problems and concerns. The book examines that horrifying moment when everything changes, the before and after when love, friendship, hopes and trust turn into dread, guilt, blame and grief.”
—Minneapolis Star Tribune

“Johnston delivers a richly atmospheric story whose depictions of the frozen winter landscape reinforce the novel’s theme of individuals unable to move on after loss . . . The Current is, in part, a mystery, but it’s also about everything that is left in a mystery’s wake — the fathers and daughters, mothers and sons facing the tormenting questions surrounding their dead or disappeared loved ones. It is an examination of the way tragedies divide but can also offer the opportunity to bring people together, ushering in the inevitable thaw that can reveal the path toward moving forward and healing.”
—The Los Angeles Review of Books

“Tim Johnston’s new novel, The Current, is an exceptional tale of suspicion and secrets—and a strong follow-up to his excellent 2015 book, Descent.”
—Cedar Rapids Gazette

“The author of Descent, returns with a tour de force about the indelible impact of a crime on the lives of innocent people.”
—The Wichita Eagle

“[An involving and layered thriller . . . Johnston’s prose is so lyrical you want to stop and read it again.”
—St. Paul Pioneer Press

“With The Current, Johnston presents readers with another slate

Tim Johnston, a native of Iowa City, is the author of the New York Times bestseller Descent, as well as a young adult novel, Never So Green, and the story collection Irish Girl, winner of the Katherine Anne Porter Prize in Short Fiction.

1. How would you describe Audrey and Caroline’s friendship when the two young women set off for Minnesota? By the time they are plunging toward the Black Root River, have your feelings about them changed?

2. After a tense opening chapter set in the present, the novel transitions to explore the past, dealing with the murder of Holly Burke in the same Black Root River, and with her relationship at the time with Danny Young. Other than the involvement of Audrey’s father, the ex-sheriff, what connections did you make between the two crimes?

3. Audrey seems to experience the sense of encountering Caroline and other girls under the water; at one point she even seems to speak with Caroline under the ice. What do you feel these visions mean to Audrey? What do they mean to you, and to your reading of this novel?

4. In what ways does the title of this novel connect to the story, beyond the current of the river?

5. Both Danny Young and his ex-girlfriend, Katie Goss, have been keeping individual secrets for ten years. What has changed to cause Katie to consider coming forward now? And why do you think Danny hid the piece of fabric for ten years?

6. For a book with so many crimes, there seems to be little absolute certainty as to guilt. If you were on the jury that heard these cases, and you had no more evidence than what the author provides with which to convict, how would you decide?

7. Though completed more than a year before the rise of #MeToo, many of the themes in the novel speak to the causes behind that movement. Do you feel the novel contains an accurate representation of the attitudes that brought about the changes in how we discuss male/ female relationships today?

8. If you were to encounter any of these characters in another ten years, do you think you would find them greatly changed, or would they still be held in the grip of their pasts?