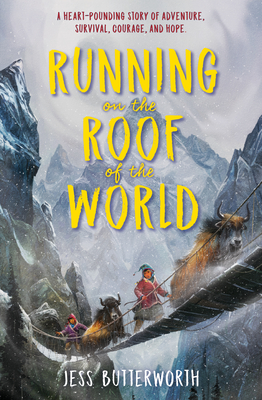 Running on the Roof of the World

A story of adventure, survival, courage, and hope, set in the vivid Himalayan landscape of Tibet and India.

Tash lives in Tibet, where as a practicing Buddhist she must follow many rules to avoid the wrath of the occupying Chinese soldiers. Life remains peaceful as long as Tash, her family, and their community hide their religion and don’t mention its leader, the Dalai Lama.

The quiet is ruptured when a man publicly sets himself on fire to protest the occupation. In the crackdown that follows, soldiers break into Tash’s house and seize her parents. Tash barely escapes, and soon she and her best friend, Sam, along with two borrowed yaks, flee across the mountains, where they face blizzards, hunger, a treacherous landscape, and the constant threat of capture. It’s a long, dangerous trip to the Indian border and safety—and not all will make it there.

This action-packed novel tells a story of courage, hope, and the powerful will to survive, even in the most desperate circumstances.


Praise For Running on the Roof of the World…

“The perfect summer novel for young middle-grade readers, [a] tale of adventure and courage, halfway around the world . . . a story told with hope and compassion.”
—New Orleans Magazine

“This unique debut novel is perfect for inspiring anyone who, like the dedication says, ‘has ever felt too small to make a difference.’”
—Booklist

“An accessible meditation on the value of faith in a distinctive geopolitical context.”
—The Bulletin for the Center of Children’s Books

“The perfect combination of adventure, friendship, cultural appreciation, and real-worldliness that make it a five-star read for kids and adults alike.”
—Foreword Reviews

“A lively tale of courage, persistence, and growth . . . Butterworth engenders warm appreciation not only for what the scrappy Tash and Sam endure but also the culture and its traditions they wish to protect, without denying that the conflict is still ongoing.”
—The Center for Fiction

“[An] adventurous tale of survival. Twelve-year-old Tash embarks on an incredible journey with her best friend, Sam, encountering Chinese soldiers and the Dalai Lama. It’s a great opportunity for kids spending the summer at home to escape to a part of the world they’re probably not all that familiar with.”
—TravelingMom.com

Jess Butterworth lives in New Orleans with her husband. She spent her childhood in both Great Britain and India, and grew up hearing stories about the Himalayas and the people there from her grandmother, who lived in India for many years. You can find Jess Butterworth online at jessbutterworth.com and on Twitter: @j_t_butterworth.
or support indie stores by buying on