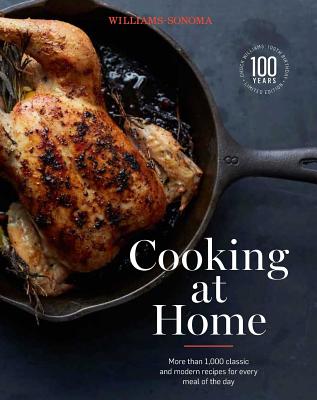 Williams-Sonoma’s culinary legacy began in 1956 when Chuck Williams opened his original cookware shop in Northern California. Since then, Williams-Sonoma has become a global kitchenware brand, with more than 250 stores in the U.S., Canada, and beyond. Re-released in celebration of Chuck Williams’ 100th birthday, Cooking at Home features over 1000 recipes from the Williams-Sonoma publishing program, which Chuck guided. In addition, the book includes 100 recipes from Chuck’s personal recipe collection.

For nearly 60 years, Williams-Sonoma has connected and inspired home cooks with the best cooking equipment and kitchen-tested recipes. Cooking At Home celebrates that legacy with recipes culled from its award-winning publishing program, which was guided by Chuck Williams for more than 2 decades. More than just a recipe collection, the book features a wealth of informative tips, techniques, and cooking know-how.

The book’s 22 chapters cover cooking topics from A-Z, making it a complete cooking reference book you can use every day, whatever you are in the mood for and whatever the occasion.Throughout this newly updated edition, you’ll find stunning photographs and special stories that highlight 100 of Chuck Williams’ personal recipes. New recipes include: quiche lorraine, deviled crab, fettucine with prosciutto and peas, poached salmon, curried shrimp with rice, meat loaf, braised endive, potato and onion gratin, giner-apple crisp, simple chocolate truffles and more!

Be sure to check out “Chuck’s Finds,” which highlight special merchandise that Chuck introduced in his Williams-Sonoma stores to the U.S. public.

A lifelong passion for good food led Chuck Williams to open the first Williams-Sonoma store in the California wine country town of Sonoma in 1956. Since then, he has devoted much of his time to encouraging people to explore the world of cooking. Over the years he steadily sought out new techniques, equipment, and ingredients to feature in his stores, catalog, an cookbooks, with the mission of spreading the pleasures of cooking at home Now more than 250 Williams-Sonoma stores are open across the United States and beyond, and Chuck is widely recognized as a pioneer who revolutionized cooking in America.
Loading...
or
Not Currently Available for Direct Purchase