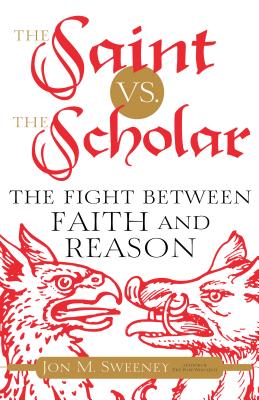 The Saint vs. the Scholar

The Fight Between Faith and Reason

The year is 1140. Inside an imposing cathedral in France's Champagne region, two of the most recognized men in the world are about to face each other in a contest of wills and a test of faith. On one side is Bernard of Clairvaux, a counselor and selector of popes who will be called "Saint" even before his death. The other is Peter Abelard, widely agreed to be the era's most brilliant thinker, a medieval "rock star" among students in the universities of Europe and on the Paris social scene. Bernard has accused Peter of heresy and "insolence before God," a charge for which Bernard has the power to order Peter executed. This intense, emotional and partisan clash between two men, the ways in which the Scholar provokes the Saint's outrage, and the final outcome of the battle, will change the course of history--and frame the conflict between reason and faith that continues to inflame passions to this day. Jon M. Sweeney, author of The Pope Who Quit: A True Medieval Tale of Mystery, Death, and Salvation and Inventing Hell, makes the case that Christians cannot understand who we are today, or how we balance what we believe with what we say, without shining a light on what might otherwise pass completely unnoticed: this small but significant episode in our history. And there is, in fact, hope to be gleaned from the study of these two giants of medieval thought. How much, it turns out, Bernard and Peter actually shared in common Sweeney points out delicacies of their spiritualities that actually link them in ways they never would have appreciated during their lifetimes. It is these delicacies, as well as what prevented the two men from recognizing them, that provide insights into exactly how we modern Christians might still recover from this regrettable--and avoidable--conflict that has reverberated through the ages. The audio edition of this book can be downloaded via Audible.

Jon M. Sweeney is an independent scholar and one of religion's most respected writers. His work has been hailed by everyone from Booklist and James Martin, S.J. to Fox News and Dan Savage. He's been interviewed on CBS Saturday Morning, Fox News, and other television programs. His books have sold more than 225,000 copies worldwide; some have been History Book Club, Book-of-the-Month Club, and Quality Paperback Book Club selections. The Pope Who Quit: A True Medieval Tale of Mystery, Death, and Salvation, was published by Image/Random House and optioned by HBO. He is also the author of Inventing Hell, and several books about Francis of Assisi including When Saint Francis Saved the Church and The Enthusiast.
Loading...
or
Not Currently Available for Direct Purchase