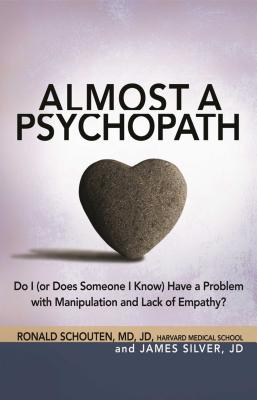 Do I (or Does Someone I Know) Have a Problem with Manipulation and Lack of Empathy? (The Almost Effect)

Do you know someone who is just a bit too manipulative and full of himself? Does someone you know charm the masses yet lack the ability to deeply connect with those around her? You might have an Almost Psychopath in your life.

Grandiosity and exaggerated self-worth. Pathological lying. Manipulation. Lack of remorse. Shallowness. Exploitation for financial gain. These are the qualities of Almost Psychopaths. They are not the deranged criminals or serial killers that might be coined "psychopaths" in the movies or on TV. They are spouses, coworkers, bosses, neighbors, and people in the news who exhibit many of the same behaviors as a full-blown psychopath, but with less intensity and consistency.

In Almost a Psychopath, Ronald Schouten, MD, JD, and James Silver, JD, draw on scientific research and their own experiences to help you identify if you are an Almost Psychopath and, if so, guide you to interventions and resources to change your behavior.

The Almost Effect Series presents books written by Harvard Medical School faculty and other experts that offer guidance on common behavioral and physical problems falling in the spectrum between normal health and a full-blown medical condition. These are the first publications to help general readers recognize and address these problems.

Ronald Schouten, MD, JD, has assessed individuals ranging from victims of child abuse, professional misconduct, and domestic violence to those accused of crimes that include bank robbery, campus shootings, and multiple murders. He is currently on staff at Harvard Medical School.

James Silver, JD, is a former federal prosecutor and current criminal defense attorney who has tried cases and handled appeals on offenses spanning the gamut of illegal behavior, from shoplifting to murder.

Praise For Almost a Psychopath: Do I (or Does Someone I Know) Have a Problem with Manipulation and Lack of Empathy? (The Almost Effect)…

"Dr. Schouten and Mr. Silver have written a sophisticated self-help book aimed primarily at those victims parents, spouses and co-workers but also at those who might sense some of these traits in themselves. The authors include a detailed discussion of the thought processes behind a psychiatric evaluation and an overview of the still-tentative theories of causation.

The almost-psychopaths are inherently fascinating; they may rise high and fall low (certain scions of politics and finance come to mind) or simply cause smaller miseries in their roles as controlling spouses, manipulative colleagues or uncontrollable teenagers.

At work they may be competent, self-disciplined and high-achieving. At home they may be charming and lots of fun. And on the inside they may be just as morally empty as any true psychopath, but the almost-psychopaths are grounded enough to keep some of their worst instincts in check, staying employed and out of major legal trouble."


"Most of us have had an inexplicably uncomfortable feeling upon meeting certain people. They do not fit the psychopath mold, but they leave us with the proverbial hairs on the back of our necks standing alert. Schouten and Silver have done a masterful job explaining both why we have this reaction and how we might deal with almost psychopaths."


At a time when the label psychopath” has devolved into a mere epithet, Schouten and Silver provide the understanding that comes from recent research in the field, as well as their many years of education, training, and clinical practice. Most importantly, their operational” approach to interactions with those who demonstrate psychopathic behaviors provides a primer for all who might otherwise fall prey to psychopathic behaviors of colleagues, co-workers, and yes, even family members.”
Gregory Saathoff, MD,
Author;
Criminal Poisoning: Clinical and Forensic Perspectives
Associate Professor of Research, University of Virginia School of Medicine


Psychopaths are the predatory and very dangerous few. Those who are almost a psychopath” create mischief and misery for many. In this marvelous book of knowledge, wisdom, and sound advice, the subclinicalor should we say subcriminalpsychopath is brought to life. He can be dangerous but not lethal, duplicitous but not completely fraudulent. We finally have a book to help us recognize and cope with this personality.
Reid Meloy, PhD
Forensic Psychologist and author, The Psychopathic Mind


The Almost Effect Series of books captures the fundamentally hum experiences and helps readers interpret what the symptoms might meanboth for themselves and others. The Almost Effect collection should be required reading for those interested in psychology and human behavior.”
Howard J. Shaffer, PhD,
Associate Professor at Harvard Medical School,
Director of the Division on Addiction at the Cambridge Health Alliance
Co-author; Change Your Gambling, Change Your Life


"Most of us have had an inexplicably uncomfortable feeling upon meeting certain people. They do not fit the psychopath mold, but they leave us with the proverbial hairs on the back of our necks standing alert. Schouten and Silver have done a masterful job explaining both why we have this reaction and how we might deal with almost psychopaths."
Mark Albanese, MD, is an Assistant Clinical Professor of Psychiatry at Harvard Medical School and the Director of Addictions at Cambridge Health Alliance.


"By highlighting the continuum of psychopathy and placing its associated symptoms and behaviors within the context of everyday encounters, the authors make understanding these difficult to manage people a little bit easier for everyone."
Sally C. Johnson, MD

Almost a Psychopath "is a powerful read for those who want to better understand this mental illness and how to work with such individuals."
- The Midwest Book Review