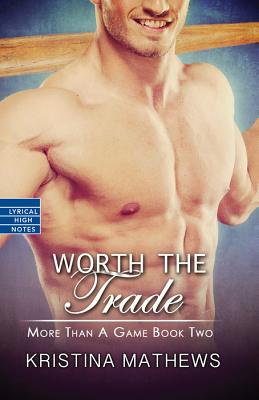 Worth the Trade (More Than A Game #2)

More Than A Game, #2 A ballplayer and a team owner would give anything for a championship—even their hearts…

After inheriting majority ownership of the San Francisco Goliaths baseball team, Hunter Collins wants to prove to herself—and the rest of the league—that she’s got what it takes to build a champion. Her first move is to trade for a hot left-fielder. He’s got it all, speed, power, and a desire to win. Not to mention undeniable charm.

Marco Santiago is tired of being the new player in town. After four teams in six years, he’s facing free agency at the end of the season. He wants nothing more than a long-term contract and a World Series win. Hitting on his new owner probably isn’t the best way to get it, but love may be the most powerful challenger either of them has ever faced...

Kristina Mathews doesn’t remember a time when she didn’t have a book in her hand. Or in her head. Kristina lives in Northern California with her husband of twenty years, two sons and a black lab. She is a veteran road tripper, amateur renovator, and sports fanatic. She hopes to one day travel all 3,073 miles of Highway 50 from Sacramento, CA, to Ocean City, MD, replace her carpet with hardwood floors, and throw out the first pitch for the San Francisco Giants. Visit her on the web at kristinamathews.com.
Loading...
or
Not Currently Available for Direct Purchase