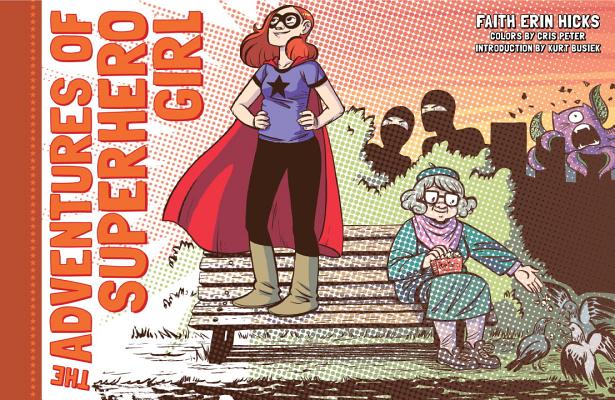 The Adventures of Superhero Girl

What if you can leap tall buildings and defeat alien monsters with your bare hands, but you buy your capes at secondhand stores and have a weakness for kittens? Cartoonist Faith Erin Hicks brings charming humor to the trials and tribulations of a young, female superhero, battling monsters both supernatural and mundane in an all-too-ordinary world. * A lighthearted twist on the superhero genre.

Faith Erin Hicks is a Canadian writer and artist. She worked in the animation industry for several years before transitioning into writing and drawing comics full time in 2008. She started making comics "for fun" and putting them on the web when she was in college. Her first published work was Zombies Calling (SLG Publishing) in 2007. Since then, she has published a number of other graphic novels, including The War at Ellsmere (SLG), Brain Camp (with Susan Kim and Laurence Klavan, First Second Books), Friends with Boys (First Second Books), Nothing Can Possibly Go Wrong (with Prudence Shen, First Second Books), The Adventures of Superhero Girl (Dark Horse Comics), The Last of Us: American Dreams (with Neil Druckmann, Dark Horse Comics), and the Bigfoot Boy series (with J. Torres, Kids Can Press). She won an Eisner Award in 2014 for The Adventures of Superhero Girl. Faith currently lives in Vancouver, Canada, with her partner, Tim, and their helpful cat. Her current project is The Nameless City, a three-book series with First Second Books.
Loading...
or
Not Currently Available for Direct Purchase