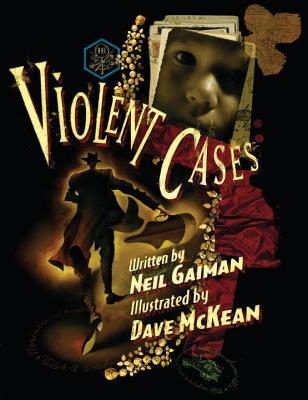 Violent Cases marks the beginning of many astonishing and award-winning collaborations between author Neil Gaiman and artist Dave McKean. It is now offered in a hardcover format with an expanded art section and introductions by Alan Moore, Paul Gravett, and Neil Gaiman A narrator remembers his childhood encounters with an old osteopath who claims to have treated Al Capone. Gradually, the England of the 1960s and the Chicago of the 1920s begin to merge into a beautifully drawn and hauntingly written tale of memory and evil.

Neil Gaiman was born in Hampshire, UK, and now lives in the United States near Minneapolis. As a child he discovered his love of books, reading, and stories, devouring the works of C. S. Lewis, J. R. R. Tolkien, James Branch Cabell, Edgar Allan Poe, Michael Moorcock, Ursula K. Le Guin, Gene Wolfe, and G. K. Chesterton. A self-described "feral child who was raised in libraries," Gaiman credits librarians with fostering a lifelong love of reading: "I wouldn't be who I am without libraries. I was the sort of kid who devoured books, and my happiest times as a boy were when I persuaded my parents to drop me off in the local library on their way to work, and I spent the day there. I discovered that librarians actually want to help you: They taught me about interlibrary loans." Neil Gaiman's work has been honored with many awards internationally, including the Newbery and Carnegie Medals. His books and stories have also been honored with four Hugos, two Nebulas, one World Fantasy Award, four Bram Stoker Awards, six Locus Awards, two British Science Fiction Association Awards, one British Fantasy Award, three Geffens, one International Horror Guild Award, and two Mythopoeic Awards. Dave McKean is an illustrator, photographer, comic book artist, graphic designer, filmmaker, and musician. His work incorporates drawing, painting, photography, collage, found objects, digital art, and sculpture. After a trip to New York in 1986, during which he failed to find work as a comics artist, McKean met writer Neil Gaiman and the pair collaborated on a short graphic novel of disturbing childhood memories, Violent Cases, published in 1987. This was followed in 1988 by a Black Orchid miniseries (again with Gaiman) and Hellblazer covers for DC Comics. Beginning in 1989 he produced the covers for Gaiman's celebrated series The Sandman as well as all its collected editions and many of its spin-offs; and the Batman graphic novel, Arkham Asylum: A Serious House on Serious Earth, with writer Grant Morrison (1989). McKean has gone on to collaborate further with Neil Gaiman in both print and film.
Loading...
or
Not Currently Available for Direct Purchase